The Monkey Ace is a very interesting Tower to place and while it can provide players with a great deal of global damage, the Monkey Ace is an unreliable tower as the Monkey Ace must be placed in a great location, though the player will still have to rely on a good amount of RNG.

The reality is that the Monkey Ace relies on a bit of RNG when it comes to any upgrade path as the Monkey Ace will launch darts in a 360° manner, essentially being able to miss a good majority of bloons simply because they move too quickly.

The same can be said about Monkey Aces that have bombs upgraded into their paths, though players have a few options to upgrade the Monkey Ace to ensure that they don’t miss out on too much damage.

There are, however, some upgrades that can solo a map, which I will cover shortly, that can essentially solo a map, especially if players are playing a round of deflation. 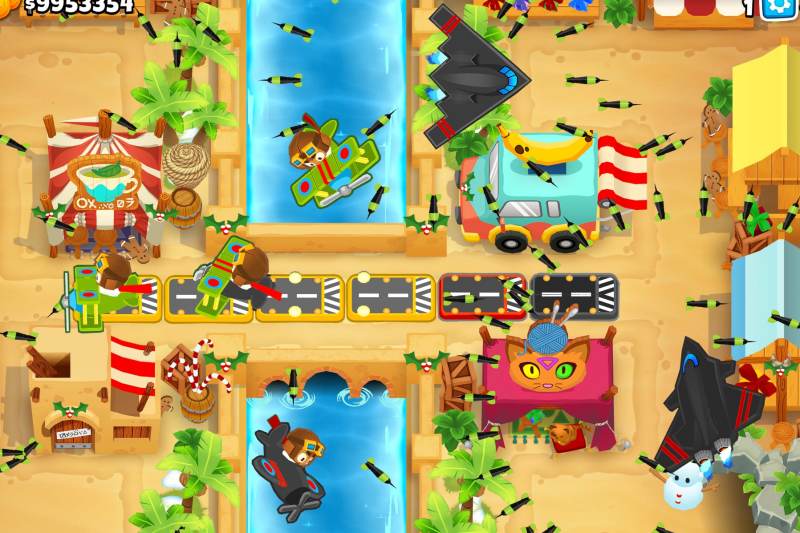 The first type of Monkey Ace players will probably have access to is the Sky Shredder.

The Sky Shredder launches a total of 32 darts at a time, shooting them twice as fast as it previously did.

While the Sky Shredder covers the majority of the screen with its darts, players are still at a bit of risk of bloons leaking from darts not being close enough together and let me tell you, I know how frustrating it is to see a dart skim by or not have enough pierce to destroy that last bloon as it crosses the finish line.

Speaking of pierce, players will be happy to note that each dart that the Sky Shredder launches has 3 damage and 8 pierce with an extra 2 damage dealt to Ceramic Bloons.

Players can extend this damage by using the Wingmonkey Monkey Knowledge as it will provide players a new form of targeting that will allow the Monkey Ace to fly around the full screen following bloons as they make their way cross the map, in essence ensuring that all bloons are damaged or at least have a better chance of getting damaged.

Without Wingmonkey players may have to micromanage the Sky Shredder in order to ensure that bloons are all destroyed without leaking.

Darts shot by the Sky Shredder will be able to shred through any type of bloon including Lead Bloons and Black Bloons.

The only bloons the Sky Shredder cannot break through are Camo Bloons unless provided Camo detection by either using another tower or Hero like Etienne or by even cross pathing it with Path 2, which I will cover shortly.

Sky Shredders are insanely powerful also retaining their tier-3 upgrade missiles that target MOAB-class bloons, which now deal 150 damage for each of the 2 missiles it launches.

When it comes to cross pathing a Sky Shredder players will have to make the decision on whether or not they need Camo detection.

I strongly recommend that players find ways of avoiding the need for a Path 2 cross path as Path 3 provides players with 3 extra pierce, essentially making the Sky Shredder a lot more powerful, being able to reach more bloons before they escape.

Players will want a (5/-/1) Sky Shredder as the (-/-/2) Centred Path upgrade is fairly useless, especially if players have access to the Wingmonkey Monkey Knowledge, which is much more useful.

By far I find the Sky Shredder to be one of the most useful upgrade paths for Monkey Aces as they can shred through many bloons and will essentially ensure that no bloons leak when up against hoards of bloons. Well… when placed next to other towers. 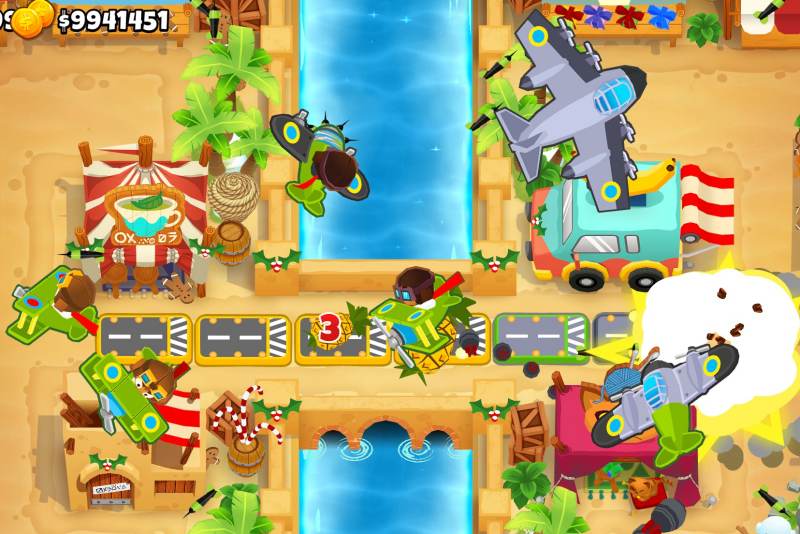 The Tsar Bomba is an interesting upgrade for players to choose when upgrading a Monkey Ace, though I must admit that I rarely use it simply because I am not a huge fan of abilities players need to activate or how unreliable the prerequisite upgrades are.

Starting off with the Ground Zero-like ability, the Tsar Bomba has a special ability that will drop a bomb that deals 3,000 damage to all bloons on screen, stunning any bloons that survive the explosion for 8.2 seconds except for the BAD.

The Tsar Bomba ability has a fairly long cooldown, coming in at 40 seconds, though it is impeccable at defeating huge waves of MOABs including DDTs, making it great for later rounds.

The Tsar Bomba is what I like to call an “oh shit!” ability for when players are looking away for short periods of time, though I strongly recommend that you do not use this ability on lower-tier bloons and focus on using it on hoards of MOAB-class bloons.

Though, that being said, the Tsar Bomba ability can also be good against Super Ceramics bloons which tend to be a problem for newer players.

Rounds to keep your finger on this ability include Round 94, Round 96 and Round 98, being three of the most difficult rounds to deal with when it comes to dense hoards of bloons

When it comes to cross pathing a Tsar Bomba, players will not actually need one as the Tsar Bomba is mostly used for its special ability.

If players are looking for a cross path they could use a (1/5/-) Tsar Bomba in order to give it faster attack speed, though any other upgrades are a bit of a waste of money as (2/5/-) simply increases the amount of darts that come out of the Monkey Ace, which are unnecessary.

As for Path 3 upgrades, Sharper Darts will just increase the pierce of the darts, which is unnecessary and Centred Path tends to be useless unless players are covering more parts of the track for their bombs or do not have the Wingmonkey Monkey Knowledge.

Realistically I would recommend saving your cash for another Tower. 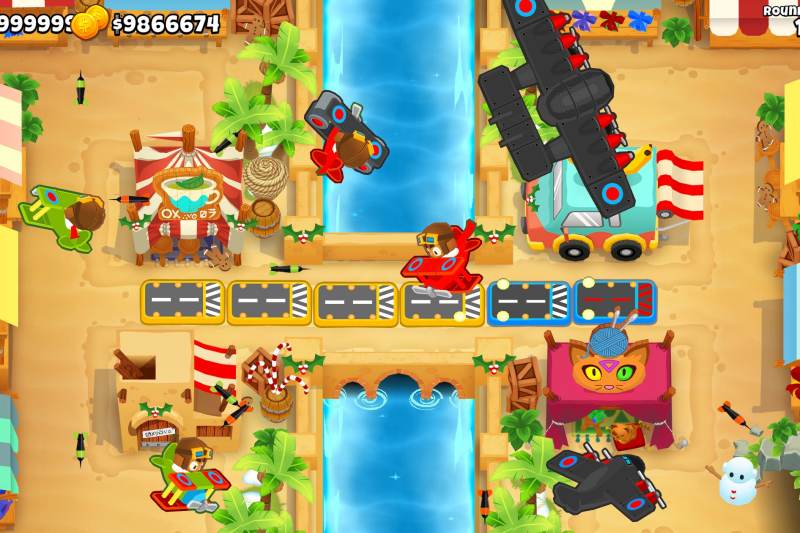 The Flying Fortress is by far one of the easiest types of Monkey Aces to simply place and forget since it has the ability to auto target bloons.

The Flying Fortress shoots 3 streams of darts and bombs and will fire 50% faster than its previous tier, essentially being able to fire every 0.04 seconds.

The Flying Fortress is able to target bloons using different targeting options without the player actually selecting anything as darts and bombs will attack bloons that are close, first or last based on what is more important.

Darts that come from the Flying Fortress will now deal 4 damage and bombs will deal 5 damage.

The biggest issue with the Flying Fortress is the amount of money it costs, often being just out of reach for a number of players.

If players are hoping to upgrade a Flying Fortress it is highly recommended that they build a number of Banana Farms.

When it comes to purchasing towers that will support the Flying Fortress, players should look into buying something that will help slow down bloons such as a Glue Gunner, Ice Monkey or even Ninja Monkey that has Bloon Sabotage. The more your are able to slow down bloons, especially MOAB-class bloons, the higher chance the Flying Fortress has in destroying all bloons before they leak.

Players can also pair an Energizer Monkey Engineer in order to raise the Flying Fortress’ attack speed and an Alchemist Monkey with Permanent Brew to really wreak havoc on those bloons.

If players hope to place a Monkey Village near the Flying Fortress Monkey Ace players are recommended to get both Radar Scanner (-/2/-) and Jungle Drums (2/-/-) as this will provide Camo detection as well as an increase in attack speed.

When it comes to cross pathing a Flying Fortress the choice is ultimately going to rely on whether or not a player is using another tower to provide the Flying Fortress with Camo detection.

Path 1 tends to be the better option as it provides players with more darts as well as more attack speed, while Path 2 will only be useful for its Camo detection as Exploding Pineapples don’t deal a great deal of damage.

While it can be argued that all three Monkey Aces deal a great deal of damage, in most cases players will want to select a tier-5 Path 1 or Path 3 Monkey Ace simply because their damage output works well on the majority of maps.

Path 1 Monkey Aces will deal the most damage to regular bloons, shooting a high amount of darts in all directions, though it is still at risk of letting lots of bloons leak.

I like using Path 1 Sky Shredder when I need some extra support shredding through lower-tier bloons, though I would not rely on them for killing MOAB-class bloons as they do not deal as much damage (especially not against DDTs) as other upgrades do.

Path 2 Tsar Bomba are mostly used for their special ability that will drop a bomb which deals tremendous damage to all bloons on the screen, stunning any bloons that are not killed by the explosion.

I personally don’t use the Path 2 Monkey Ace simply because the previous upgrade paths cannot guarantee the destruction of bloons, though they are very good at destroying Lead Bloons and Ceramic Bloons with the assistance of more regulated Towers.

Path 3 is the most optimal Monkey Ace for players to place as they guarantee that bloons are targeted at all times due to the homing nature of the Flying Fortress.

If players are not worried or are confident in their ability to make money they should definitely work towards grabbing themselves a Flying Fortress.

So I’m curious, what’s your favourite type of Monkey Ace and what maps do you prefer to use them on? Do you also love the Path 3 Flying Fortress or are you simply a Sky Shredder user? 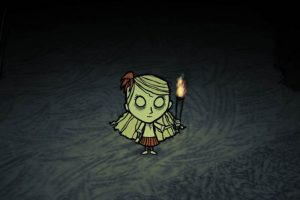 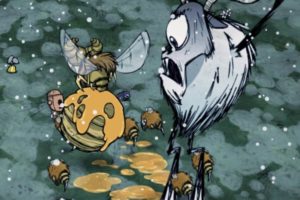 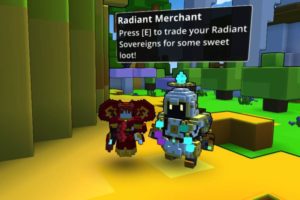