When it comes to the Ice Monkey I can’t say I use it a whole lot, though admittedly the Ice Monkey is an extremely strong Tower that can provide players with the ability to freeze bloons on spot.

The Ice Monkey isn’t the best at dealing damage, though plays can essentially use the Ice Monkey to stall bloons in time for other towers to damage them.

The one downfall to the Ice Monkey is that players will not be able to damage Frozen Bloons if they are using sharp projectiles, though with some upgrades players will be able to pierce through them. Players can also use Towers such as the Bomb Shooter or Wizard Monkeys to deal damage to Frozen Bloons before they get to the heavier damage dealing Towers such as the Super Monkey or Dartling Gunners with Plasma attacks.

The reality is that most Towers gain ice popping when they are upgraded including the Dart Monkey, Boomerang Monkey and Tack Shooter.

Even if players don’t damage the Frozen Bloons that are created by the Ice Monkey, a player will still benefit from stalling bloons by freezing them for brief moments essentially providing a player with some extra time to damage bloons.

While again this strategy does not make the most out of the damage players can deal while using an Ice Monkey, players will still be able to use this strategy to  mitigate bloons in hopes of ensuring that they do not flood or leak.

So let’s get deep diving into all the  perks of using each tier-5 Ice Monkey is so you can choose which Ice Monkey you want to use in BTD6. 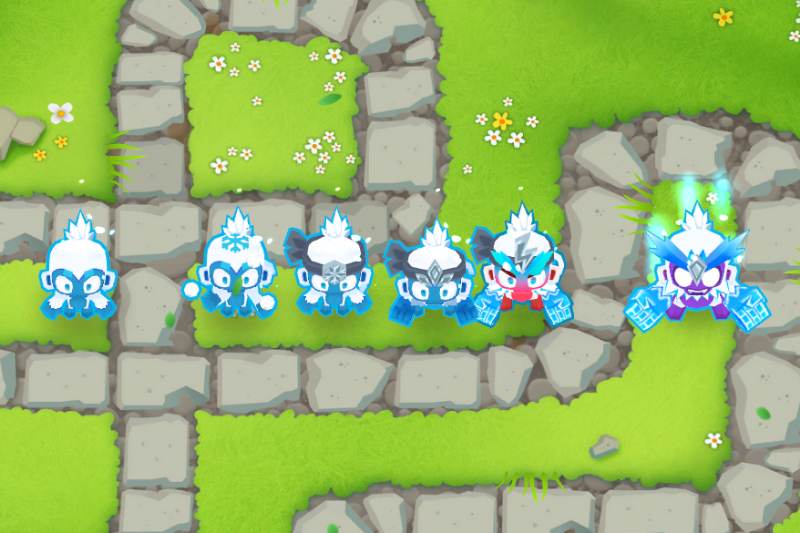 The Path 1 Ice Monkey is by far one of the best Ice Monkeys players can place as they will be able to deal damage to any type of bloon including MOAB-class bloons, White Bloons, Zebra Bloons and Camo Bloons.

The Ice Monkey is quite powerful being able to shred through 5 layers of bloons for every attack.

Not only that, but bloons that are damaged when the Ice Monkey has applied Super Brittle onto them will take an extra 4 damage per hit, though players should remember that not all towers will be able to damage frozen bloons.

Players will have 3 seconds to deal the extra 4 damage per shot, being a shockingly good amount of time to deal more damage.

Players should try to place as many towers that damage frozen bloons next to a Super Brittle Ice Monkey as this will greatly increase the damage output of all towers.

Players should be wary when placing a tower that cannot damage Frozen Bloons as this will greatly reduce the DPS a player is dealing.

The only things the Path 1 Super Brittle Ice Monkeys lack are range and DPS, though with the addition of a number of ice shattering towers beside one, players can crank out some epic DPS,

Players can extend the radius of the Super Brittle Ice Monkey in a few different ways, the first being a Path 1 Monkey Village and the second being a Path 1 Alchemist Monkey.

Players will want to place Dark Knight Super Monkeys, Airburst Dart Monkey Subs, Bloonjitsu Ninja Monkeys and Grape Shot Monkey Buccaneers near their their Super Brittle Ice Monkey as they will deal the most damage due to their rapid projectiles and ability to stack multiple shots with the +4 damage modifier. 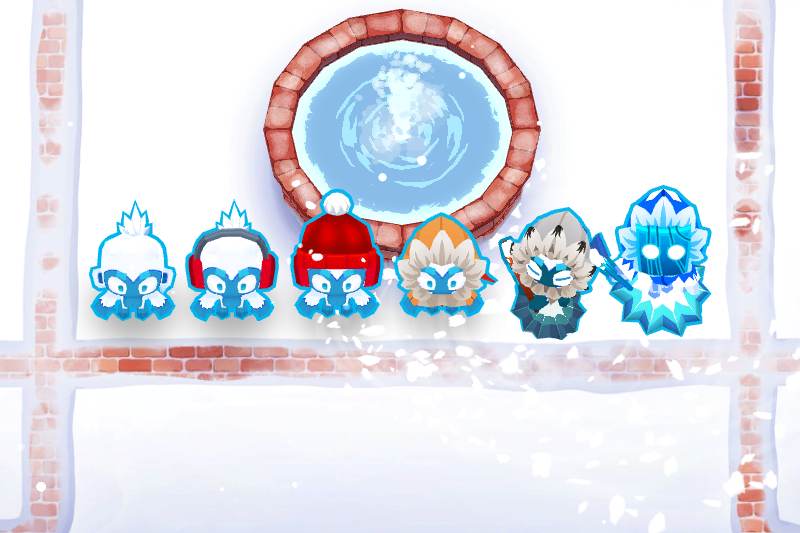 The Absolute Zero Ice Monkey is an ability driven support tower that when activated will freeze all bloon types for 30 seconds, allowing players to activate the ability every 15 seconds.

Absolute Zero Ice Monkeys are able to freeze a total of 300 bloons at once and can freeze 4 layers of bloons at once, only dealing damage to 1 layer at a time.

While the Absolute Zero Ice Monkey is a fairly strong tower, players will mostly be relying on its ability rather than the tower itself, being most powerful against DDTs and other MOAB-class bloons that wouldn’t be able to be frozen completely otherwise, well that is without a Bloon Sabotage Ninja Monkey.

The Absolute Zero Ice Monkey is by far the biggest support tower of the three paths and quite frankly works well even with a Super Brittle Ice Monkey.

Players will want to cross path with Path 3 as this will increase the freeze radius of the Absolute Zero Ice Monkey as well as give it the opportunity to Re-Freeze already frozen bloons, essentially providing players with some extra time to shatter through bloons.

Due to fact that Absolute Zero has the ability to freeze 300 bloons with its main attack, players will want to ensure that they have the widest range to make sure that they always impact the 300 bloons.

Players could cross path with Path 1 to cause bloons to more more slowly after thawing out and shatter through Lead Bloons, however, these are much less important qualities for this type of tower.

In my opinion, I find the Absolute Zero Ice Monkey to be the least used Ice Monkey Tower as Super Brittle is much more beneficial. 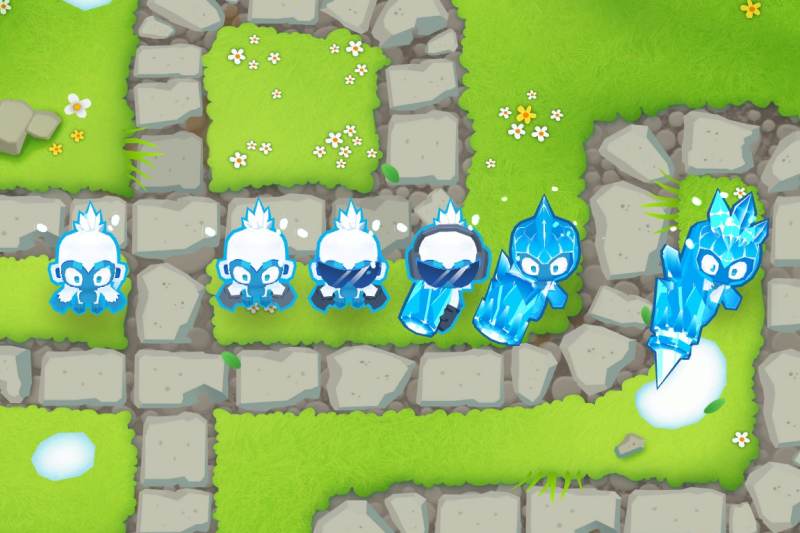 The Icicle Impale Ice Monkey is the most DPS focussed kind of Ice Monkey and will be able to damage any MOAB-class bloon by 50 also slowing them down by 50%, other than BADs.

Icicle Impale Ice Monkeys are special in the fact that they will be able to damage White and Zebra Bloons and will deal damage every 0.75 seconds.

When it comes to cross pathing, players will want to cross path with Path 2 to cause the tower to deal more rapid damage.

In most cases, players will want to pair up an Icicle Impale Ice Monkey with a Monkey Village that has Monkey Intelligence Bureau (-/3/-), which would make Path 1 upgrades a bit useless.

Icicle Impale Ice Monkeys see the most use in Impoppable and CHIMPS due to their ability to shred through DDTs fairly easily.

They are personally my second choice.

When it comes to Ice Monkey’s their usefulness is pretty clear, in my opinion.

I like the Super Brittle tier-5 Path 1 Ice Monkey the best as it can freeze/slow down any type of bloon and does not require any supporting towers to grant it Camo detection. Not only that, but players can stack damage on any frozen bloon as long as the tower is able to damage the frozen bloons, essentially meaning that a player can shred through bloons by using a kill box.

Super Brittle Ice Monkeys get used on almost every map I play, but when I don’t use one I prefer the Path 3 Icicle Impale Ice Monkey simply due to the raw damage it deals to MOAB-class bloons.

MOAB-class bloons are by far the most frustrating type of bloons players can be met with and any towers that can focus on dealing damage to them are good in my books.

If you’re simply looking for support and have enough high damage yielding towers, I strongly recommend sticking to Path 2 Absolute Zero Ice Monkeys as they provide the most support to players and will be able to keep back a maximum of 300 bloons at a time.

Absolute Zero Ice Monkeys also come with an “oh shit!” button that allows players to freeze all bloons on screen to ensure that no bloons leak, making them a great candidate, though still low on my personal priority list.

But I’m curious, do you agree with my thoughts? Do you prefer a specific Ice Monkey over any of the ones I’ve mentioned, or are you also a Path 1 slut? 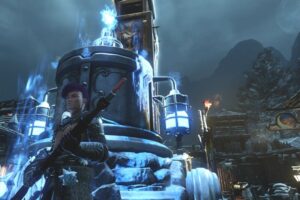 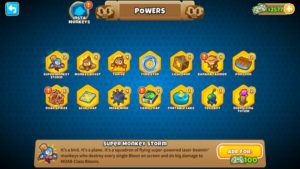 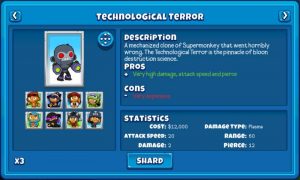