The Monkey Sub is the most reasonably priced Military Monkey and depending on what upgrade path players choose to use, players will be able to have global range as long as there are other towers placed around the map.

While the Monkey Sub isn’t very strong when it’s placed on it’s own, the Monkey Sub can be paired in hopes of being able to shred hoards of bloons or can be upgraded to destroy Lead Bloons or shred through MOAB-class bloons.

Not only can the Monkey Sub become a high damaging attack tower, but players can also upgrade the Monkey Sub in order to make it a completely support tower that reveals Camo Bloons for all towers, similar to a Shimmer Wizard Monkey.

The Following Guide will take you through everything you need to know about a Monkey Sub and all the options players have when choosing to play with this truly versatile Tower. 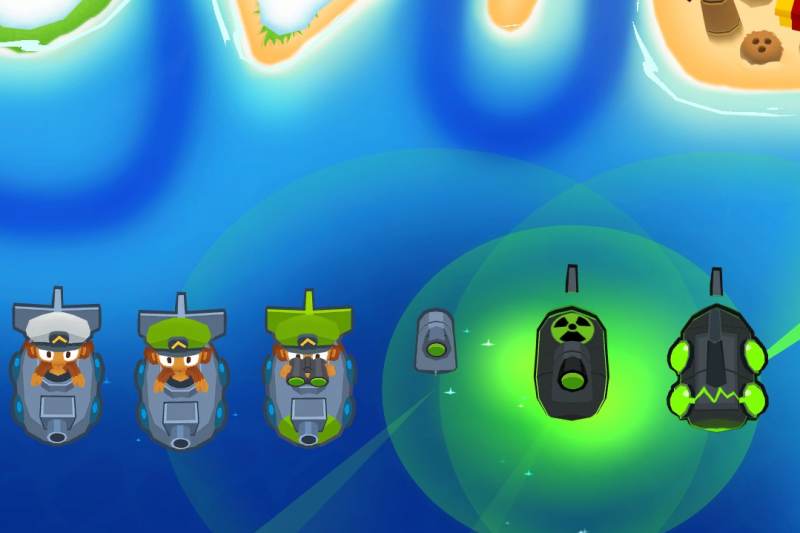 The Energizer is what I refer to as one of the ultimate support Monkey Sub as it for the most part is used to… well support other towers.

The Energizer will allow all Heroes to gain experience 50% faster meaning that players who are using slow charging Heroes that require more experience will be able to level up their Heroes faster. Some of these heroes include Adora, Captain Churchill, Benajmin, Ezili, Pat Fusty and Admiral Brickell.

Not only with the Energizer Monkey Sub allow Heroes to gain experience faster, but it will allow all water based Monkeys in it’s radius to gain a 50% cooldown on their abilities.

When you thought that the cooldown reduction was done, you couldn’t be more wrong as the Energizer Monkey Sub also reduces the remaining tower’s abilities by 20%.

The Energizer Monkey Sub, keeping the Bloontonium Reactor attack from its previous upgrade, will now be able to pierce through 1,000 bloons at a time, now dealing 3 damage to each bloon instead of 1.

The Energizer Monkey Sub gains the majority of its perks when it is submerged, meaning that players will not want to resurface it it unless they wish to deal global damage.

While Admittedly the Energizer Monkey Sub is powerful, especially for it’s capabilities to reveal Camo Bloons, especially DDTs, it is usually my last choice of Submarine Monkey as there are many other towers that can do similar work on bloons.

I mostly use Energizer Monkey Subs in race events, but otherwise I stick to the other forms of Monkey Subs because they are more useful in my opinion. 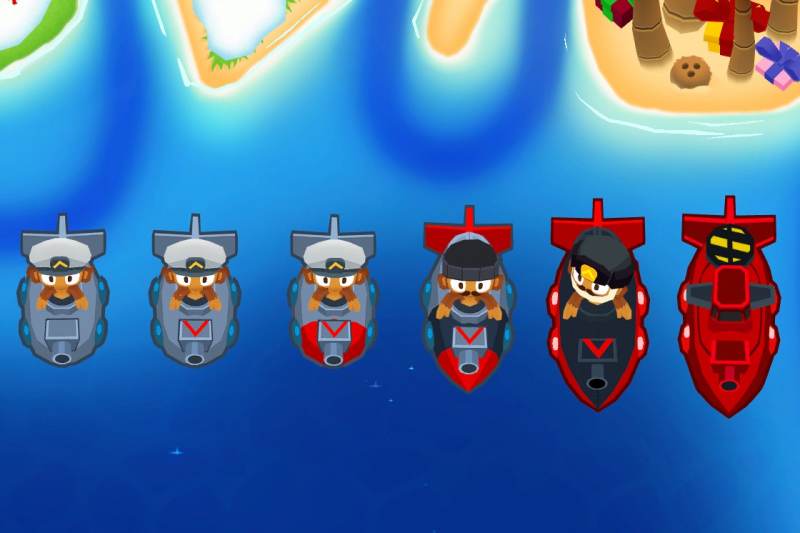 The Pre-Emptive Strike Monkey Sub is MOAB focussed tower that will automatically trigger every tie a MOAB-class bloon enters the player’s screen.

The Pre-Emptive Strike will deal 750 damage to the MOAB-class bloon, essentially providing the player with a massive buff and a great head start on taking down bloons as big as BADs.

The Pre-Emptive Strike Monkey Sub will keep it’s First Strike ability allowing players to now deal 1,000 damage every 45 seconds instead of every 60.

The Pre-Emptive Strike Monkey Sub will also still shoot out missiles every 0.433 seconds (instead of every 1.3 seconds) dealing 11 damage to Ceramics and MOAB-class bloons.

While this might not seem like a whole lot of damage, due to the extreme rapid fire of this attack, players should be able to shred through strong bloons in no time especially if the Pre-Emptive Strike Monkey Sub is set to “Strong” targeting.

It should be noted that the Pre-Emptive Strike does not require camo detection to fire, though players will need another tower with Camo detection if they wish to damage Camo Bloons outside of this strike.

I personally like this as this will ensure that strong bloons area always being damaged as the more damage a player outputs, the higher the chance the player will be able to quickly destroy MOAB class bloons, being able to focus on the lesser bloons earlier.

Players can cross path using Path 3 if they wish to increase the attack speed of the close up bloons, though I don’t usually recommend this as the Monkey Sub’s range is fairly small.

By far, I think the Path 2 Pre-Emptive Strike Monkey Sub is the best upgrade as it ensures that all MOAB-class bloons have some damage on them before players have to start attacking them with their other towers. 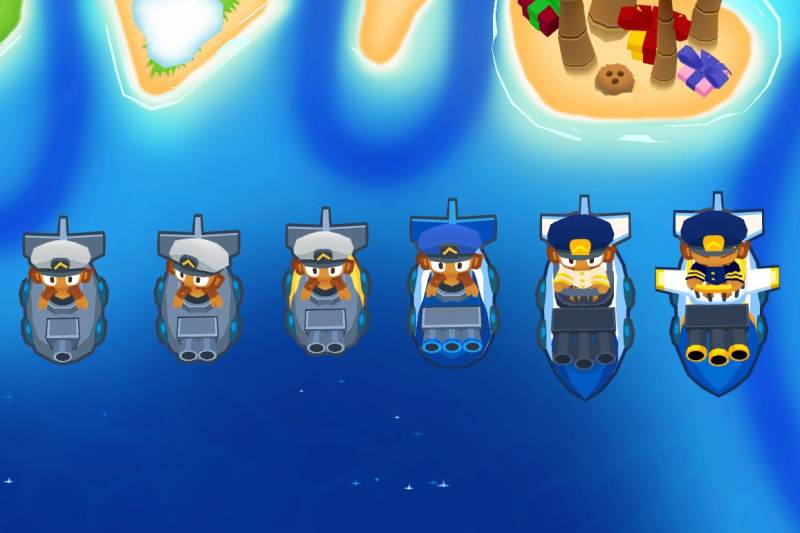 The Sub Commander Monkey Sub used to be my favourite towers as I was under the illusion that it dealt more damage than it really does.

The Sub Commander comes with a number of perks, the first being the fact that it will grant 4 pierce and double damage to all Monkey Subs in its radius, making it especially useful if players are hoping to place a Pre-Emptive Strike Monkey Sub, though players should note that it will not affect the First Strike ability’s missiles.

The Sub Commander itself will attack very fast at an overwhelming attack every 0.125 seconds and will now deal 4 damage with it’s main dart as well as 8 damage towards MOAB-class bloons.

Not only that, but the Sub Commander will also deal 2 damage to normal bloons and 4 damage to MOAB-class bloons using it’s Airburst Darts and will have 9 pierce.

Players can purchase the Sub Admiral Monkey Knowledge in order to buff all Monkey Subs on the map, making the Sub Commander more viable as an option.

When it comes to choosing a cross path for a Path 3 Monkey Sub players should always choose Path 1 as the Monkey Sub will greatly improve in damage and versatility once it is given the range of other towers.

Doing so will help ensure that clumps of bloons are destroyed instead of only being able to rely on the small range that comes with the base Monkey Sub.

With a Path 1 cross path, players will witness the darts from the Monkey Sub flooding the whole screen essentially annihilating children bloons that are at risk of leaking.

If players are feeling ballsy they can place a number of (-/3/2) Monkey Subs nearby to deal massive damage to MOAB-class bloons for brief periods of time, being one of the best strategies for taking down MOAB class bloons.

While no longer my favourite, I do have to say that I still use the Sub Commander extremely frequently (ie. whenever I can) simply because of it’s impeccable wave clear.

So when it comes to Monkey Subs players have a few great options they can make depending on what it is they need.

The best Monkey Sub in my opinion is the Path 2 Pre-Emptive Strike due to its insane damage towards MOAB-class bloons, especially when paired up with global damage, though even the damage buff with a Path 3 cross path is nothing to joke about.

The Sub Commander comes in next with it’s high pierce buffs and it’s ability to empower all Monkey subs in it’s radius.

The Sub Commander becomes nothing to joke about when given the Sub Admiral Monkey Knowledge and effectively allows players to place Monkey Subs anywhere to indefinitely expand the attack radius of all Monkey Subs.

I’m a bit sad to say that I’m not a big fan of the Energizer Monkey Sub, even though it has a shocking high amount of pierce and the ability to reveal Camo bloons.

In my opinion, the Energizer Monkey Sub is too supporty for my liking and I can realistically get everything that it provides with other towers that allow me to save money for the higher cost more powerful towers.

So, I’m curious, do you share my opinions? Is the Path 2 Pre-Emptive Strike Monkey Sub also your favourite or do you absolutely love the Path 1 Energizer Monkey Sub?

Have I got this whole thing wrong? 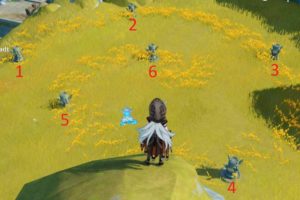 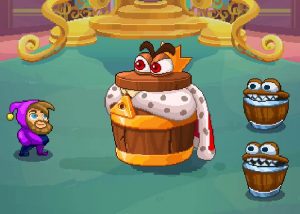 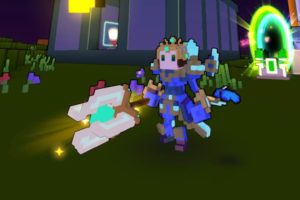