Being a Reign of Giants exclusive, Webber is one of the two characters in the DLC who is not unlocked via Experience in single-player Don’t Starve (RoG). Webber does not require players to unlock him in Don’t Starve Together.

HOW DO YOU UNLOCK WEBBER IN DON’T STARVE?

The thing about Don’t Starve is that there are so many different compartments and hidden secrets in the game. I, for example, had found the object which unlocks Webber about 4-times before I took the time to look it up and see what it does. The item which talking about is, of course, Webber’s Skull.

Upon finding Webber’s Skull, it is your duty to find a Grave to place Webber’s Skull into. If the Grave is not previously dug up, use a Shovel to remove the covering and begin burying Webber’s Skull. Webber will appear and immediately after the grave will be struck by Lightning, summoning 6 Spiders.

The Spiders are aggressive, so make sure that you have a Spear or Tentacle Spike with you. You do not have to kill the Spiders to unlock Webber, so even if you die immediately after you are fine. 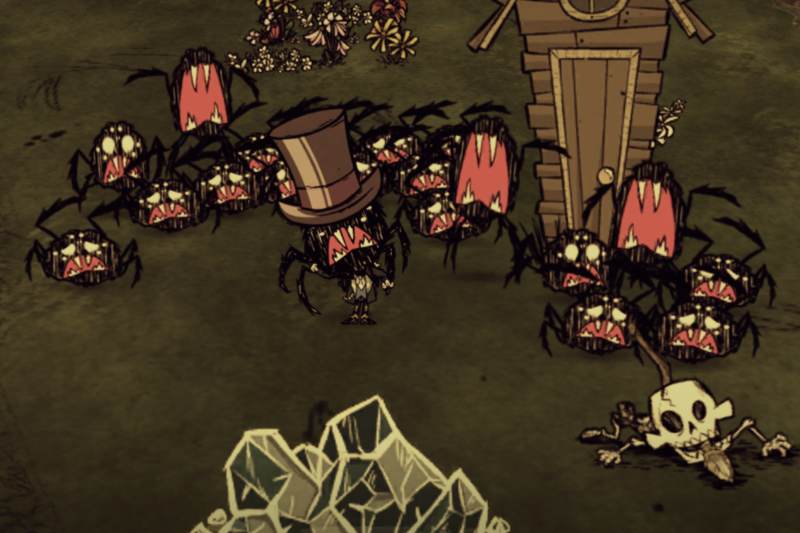 Webber has relatively low stats in comparison to other characters in Don’t Starve coming in at 175 Hunger, 100 Sanity and 175 Health.

Webber will spawn into the world with Spider Eggs, which can be placed to make a Spider Den, and 2 Monster Meat.

ALL SPIDERS ARE NEUTRAL TOWARDS WEBBER

Remember that long list of Spiders? No? Well, here are all the mobs that are not hostile towards you unless attacked: Spiders, Spider Warriors, Spitters, Cave Spiders, Dangling Depth Dwellers, and Spider Queens.

Not only are Spiders neutral, but Spiders don’t cause any Sanity drain for Webber. So, if you’re playing Webber solo, make your home close to Spiders for extra protection. You may even be lucky enough to get a map that spawns the Queen’s Gathering, which is a set piece that contains a ring of Tier 3 Spider Dens. While the name of this set piece would make one believe that Spider Queens would be found, there is a chance that none will be spawned at first.

Since Spiders are not hostile to Webber, they will not appear when Webber stands on their webbing. Spider webs will not affect Webber’s movement speed either. Remember, as soon as you attack a Spider, the whole army will attack you.

Since Spiders are neutral to Webber players, players may have to use Chester or Glommer to help get the Spiders out of their den. Glommer is the better choice, as Spiders are not hostile towards Glommer but still come out of their den when Glommer is on their web. Chester will get attacked by Spiders immediately upon sight, so if there’s any Spider Warriors, expect a dead Chester. You can also choose to wear a Spiderhat which drops from Spider Queens and Krampus (Don’t Starve Together)

Webber can make friends with his Spider brethren by feeding them any Meat. When fed Meat the Spider, and up to 4 Spiders in a 15 unit radius will follow Webber for a maximum of 2.5 Days.

The duration a Spider will follow you depends on how much Hunger value is in the food given. For each Hunger a food gives, a spider will follow for 19.2 seconds. So, a Morsel, Batlisk and Monster Meat, which provide players with 12.5 Hunger, will only give 4 minutes of loyalty.

The way I look at it is, I will train Spiders with anything I have in my inventory because most food becomes expendable, especially if you are killing a lot of Spiders. Similar to Wickerbottom’s On Tentacle book, I feel like training Spiders to kill Spiders provides more resources than it takes to get them. So, start training those Spiders, baby!

Webber will be able to befriend/train every type of Spider except for the Spider Queen and Spider Monkey (Shipwrecked). The Spider Queen, however, can still fight for you if a Mob attacks her or her Spiderlings.

WEBBER IS A BIT OF A CANNIBAL

A Webber perk that will help you in the early game is that Webber can eat Monster Meat without any Health or Sanity penalties.

Use Monster Meat when you are running low on Hunger, but don’t waste your time cooking it because it won’t benefit you. Monster Meat is best when eaten raw, and you will be wasting both time and resources when making Monster Lasagna, Monster Jerky, or Cooked Monster Meat.

Webber can craft his own Spider Dens with 12 Silk, 6 Spider Glands and 6 Papyrus. I wouldn’t recommend crafting Spiders Dens, though, because they are costly. Instead, I would take down 3-tier Spider Dens and move them or kill Spider Queens.

WEBBER HAS A BEARD

Similar to our favourite default character Wilson, Webber grows a beard. Although Webber can grow a beard, Webber’s beard acts very differently than Wilson’s beard. So, for you Don’t Starve Together players who were planning on bringing both Wilson and Webber, there’s no problem with doing just that.

Webber’s beard can first be seen on Day 4 and will provide 11.25 Insulation. If shaved with a Razor, Webber’s Short Beard will yield 1 Silk. If Webber shaves his beard at this state, it will take 3 days to grow back.

Webber’s beard takes 9 Days to become a Silky Smooth Beard, which first appears on Day 10. Silky Smooth Beards provide players with 6 Silk and will give Webber players 67.5 Insulation, which is about 3/4th what Wilson gets from his Beard. Still, having a full beard in the Winter is handy if you need to leave the base to gather resources.

If Webber’s beard is shaved, it will return the player with 10 Sanity, though shaving your beard is not the best way to obtain Sanity. Players can choose to use the 6 Silk received from Webber’s Silky Smooth Beard to craft the Top Hat, which will provide Webber players with 3.3 Sanity per minute for a maximum of 8 Days. The Top Hat should be able to deal with the majority of Webber’s Sanity loss and should not be worried about “wasting” silk since it is easy to collect as Webber.

In the Winter, I would save Webber’s silk for a Winter Hat if you do not have the resources for a Beefalo Hat. Although the Top Hat gives players more Sanity, the Winter Hat will help make sure you don’t freeze for at least 10 days. Although, you alternatively keep your beard silky and smooth, rocking it and a Thermal Stone all winter.

You will want to regularly shave Webber’s beard in the Summer as it will lead to overheating. I would still grow your beard to full-length regularly as it will give you a steady amount of Silk, but be ready to use some Endothermic Fires when stationary.

If players die as Webber and are revived by a Touch Stone, Meat Effigy, Floral Postrid or by another player, Webber’s beard will disappear.

Don’t Starve and Don’t Starve Together have a rich storyline where Pigs hate Merms, and Bunnymen hate meat-eaters, but this storyline continues even further than Webber.

Bunnymen, Catcoons and Pigs can’t seem to stand Webber, even if he tries to give them foods or treats. Not even the Pig King will make Gold Nugget trades with Webber! The hatred extends to Shipwrecked, where Wildbores and Bottlenosed Ballphins will also attack Webber at first sight. Unshockingly, you’re not safe in Hamlet either as Pig Traders, Royal Guards and Pogs will attack Webber unless wearing the Shamlet Mask, which is exclusive to Hamlet.

In many cases, these mobs won’t bother you, because you can simply train Spiders to kill them for you. You can also place Spider Dens near hostile mobs to passively kill them while you get other things done. 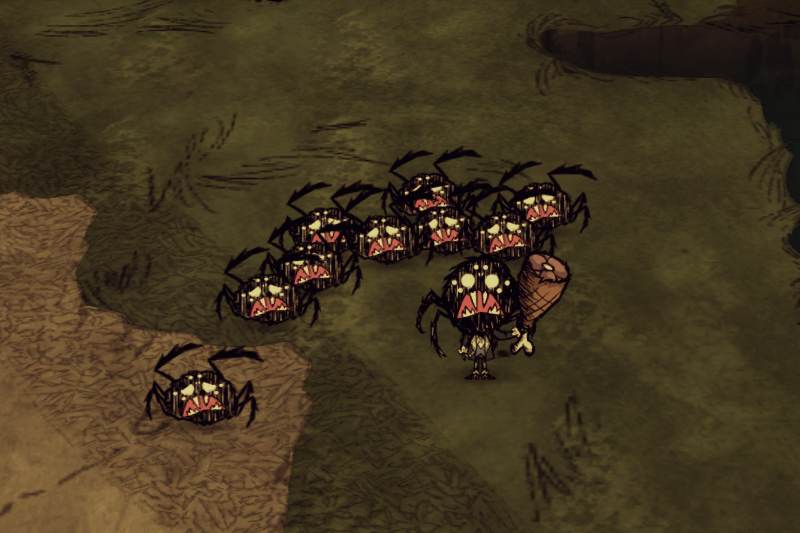 WEBBER IS MORE POWERFUL IN CAVES

Unlike Abigail, who becomes more powerful at dusk and night, Webber is more powerful in caves because there are more Spider Dens. In most cases, Spider Dens will outnumber other mobs, so get ready to train some Spiders and storm the Ruins.

If you are playing Single-Player Adventure Mode, Webber is a little sneak who takes his beard with him. So, if you are about to use the Wooden Thing to move to a new world, make sure your beard is the length you want it, because it may be crucial to survival.

Webber is an enjoyable character to play, especially if you take advantage of befriending Spiders. While a small Spider army won’t do much for you, having an army can take down a Giant or Boss. You’re going to want to make sure that you have a number of Spider Dens near you to get the fuel for the army.

Webber’s Spider Army can contain different types of Spiders, becoming excessive or overpowered fairly quickly. For example, if your map contains a Queen’s Gathering, you will have more than enough Spiders to defeat a seasonal Boss in Reign of Giants (RoG).

Even if you don’t main Webber, I would recommend trying him out to see how big of a Spider Army you can build and take down some big baddies.

The only issue I really see with Webber is in Don’t Starve Together, as Webber’s perks don’t really help any other characters like a Maxwell and Wickerbottom team. The one character who Webber can “help” is Willow because her teddy bear Bernie needs Silk, but because of how easy it is to get Silk, it’s not much of a combo.

Also, just because Spiders aren’t hostile towards Webber, doesn’t mean that Spiders aren’t going to be hostile towards your teammates. While befriended Spiders will not aggro teammates, befriended Spiders will attack if they are attacked. I don’t know about you, but when I see a Spider I always smack it. I stopped counting the number of times I got killed by my sister’s Spider army by mistake.

Playing Webber in Don’t Starve Together will also require the Webber player to place their Spider Dens far away from the base, so teammates don’t die by Spider. It’s sad when your number one death is to a Spider. Change it.

There are also some characters you may want to avoid playing with Webbers on your server including Wendy, due to Abigail, Wurt, because of her Merms.

Webber can help support characters who need lots of Sanity by crafting them Top Hats, a primary example being Wortox.

I guess another great use for Webber is to provide Woodie players with endless supplies of Monster Meat so that he can transform at any point.

Webber, in my opinion, should be saved for single-player mode if you want to optimize him properly, but prove me wrong.

So, I’m curious, how many of you are thinking about being Webber mains? What’s the most enticing quality of Webber? Let me know in the comments below!

If players are looking for more stats from food when it comes to Webber, they should really feed him Ice Cream.

Instead of providing 25 Hunger, they will provide Wilson with 40 Hunger. 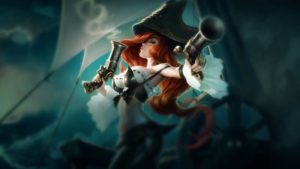 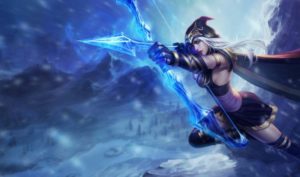