When it comes to completing dailies, players will want to make sure that they are aware of their Requests and Bounties.

While Requests and Bounties are not going to be something players complete on a daily basis, players will want to ensure that they complete them on the weekly cooldown as this will not only provide players with ways to upgrade their reputation with Mondstadt and Liyue which is unobtainable otherwise.

The reality is that both Requests and Bounties don’t provide players with the most impressive rewards, however, due to the high amount of experience players will receive towards their Battle Pass.

The reality is that the Battle Pass rewards are some of the best rewards a player can collect in the game as many rewards include Intertwined Fates or Acquaint Fates which will allow players to purchase or unlock new characters or weapons.

Completing the Battle Pass will also provide the player with a variety of awards that can provide a character with experience, materials to level up weapons and of course Mora. 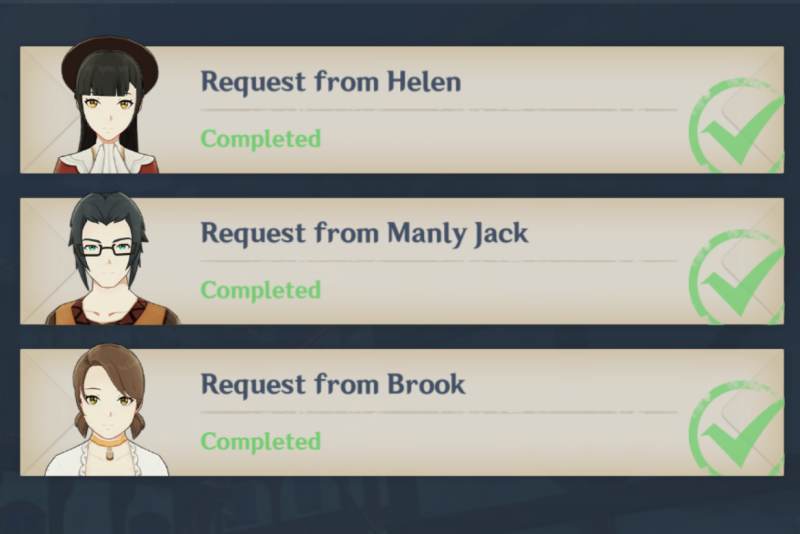 HOW TO UNLOCK REQUESTS

Requests are unlocked immediately after players unlock the reputation of either Mondstadt or Liyue.

Players will need to complete the following:

Complete “The Outlander who Caught the Wind” Prologue: Act 1 (Mondstadt)

HOW TO ACCEPT BOUNTIES OR REQUESTS

In order to accept a Bounty or Duty players must head to a Knight of Favonius, Co-ordinator, the main one being Hertha in Mondstadt.

Players must ask what their reputation for each city is, where they will be prompted with four options.

These options include exploration, requests, bounties and quests.

Players will complete world exploration and quests by completing the main story and unlocking teleport locations, though players will have to go out of their way to complete bounties and requests.

WHAT IS A REQUEST?

Players must head to a Knight of Favonius Coordinator in order to receive the requests, essentially providing players with the option of completing a maximum of 3 requests a week.

There are currently four different requests players can complete on a weekly basis, essentially being a pretty repetitive part of Genshin Impact.

The following are the requests players can complete.

The following are the requests players can complete in order to gain reputation in Mondstadt:

Helen’s request requires players to find 10 Sweet Flowers and hand them in.

It’s a good idea to pick up any Sweet Flowers you see along your travels as players will want to turn in these requests as quickly as possible so they don’t have to sit around for too long.

Helen is located by the Flower Shop when players are ready to turn in their Sweet Flowers.

Manly Jack’s request requires players to turn in 3 servings of Chicken-Mushroom Skewers of any quality.

Chicken-Mushroom Skewers can either be made by using 1 Mushroom and 1 Fowl or players can purchase them from the Good Hunter Shop for 450 Mora each, or for 405 each if a player has good reputation with Mondstadt.

In order to save Mora, it’s always a good idea to kill as many birds as a player can while exploring and to collect any Mushrooms they see as Mora comes fairly rarely for players and should be saved for character upgrades and weapons.

Brook’s request requires players to hand in 6 servings of Fowl.

As Fowl is commonly used for cooking recipes it’s a good idea not to use all of them when Monday’s reset is coming around as it can be annoying finding birds to kill around the Genshin world.

Birds are commonly found near bodies of water such as beaches or lakes and will require players to yield a Bow with characters like Amber as often birds get scared when a player is around.

I personally like farming around the first Statue of the Seven as there are many birds there that will stay swimming and will not fly away.

Players will also be able to obtain a good amount of Fowl by searching through crates which have the chance of containing Fowl.

Glory’s request is one of the easiest requests to complete as there are many Dandelions located right outside of the gates of Mondstadt.

Players will have to use an Anemo character in order to blow the Dandelion Seeds from the plant.

Luckily players do not need that many Dandelion Seeds and can easily farm them throughout the week quickly.

Truthfully Timmie’s request is quite annoying and time consuming as Wheat is not an easy resource to collect and players will often gather lots of Wheat in order to change into other products, though similar to many of the other requests, it’s a good idea to keep a good amount of Wheat in your inventory at all times to ensure that you don’t need to run around the world in order to collect them.

After collecting the Wheat, players will be required to actually feed the Pigeons.

The following are the items Connor may request:

Similar to the quests above, it’s always a good idea to have some Cecilia on hand in order to complete Chlori’s request quickly.

Alfred’s request requires players to deliver 3 Cecilia or 3 Windwheel Asters to him.

Similar to many of the quests above, it’s a good idea to have Cecilia or Windwheel Asters on hand at all times to ensure that you don’t have to run around and get more.

The following are the requests players can complete in order to gain reputation in Liyue:

Geri’s request requires players to provide him with one of the following items:

Players will often have these foods on hand, though players should always be preparing as much food as they can in general

As Iron Chunks are fairly common items to find, most players will be able to hand these in immediately, though players should always try to gather at least 10 mined resources a day due to their daily task.

Gui’s request will require players to hand in one of the following objects:

Players will only be able to collect Silk Flowers in the Liyue Harbor, meaning that players will want to ensure that they get as many of this resource daily as possible.

Iron Chunks are very easy to collect and players will often want to use these to get their daily challenges complete.

The following are the three options players may be required to bring:

CAN YOU ACCEPT MULTIPLE REQUESTS AT ONCE?

Yes, players will be able to accept all the requests available to them at once, meaning that players can do a very quick turn in process as soon as weekly reset hits.

HOW MANY REQUESTS CAN I ACCEPT A WEEK?

Players will only be able to complete 3 requests total between all cities in the Genshin world, meaning that players will have to pick which Requests they complete wisely, especially if they want particular rewards that pertain to a certain city.

Though players will only be able to complete 3 quests between both of their cities, players will be able mix and match between the various requests they accept.

WHAT REWARDS TO I GET FROM REQUESTS?

Each request will provide players with 20,000 Mora and 40 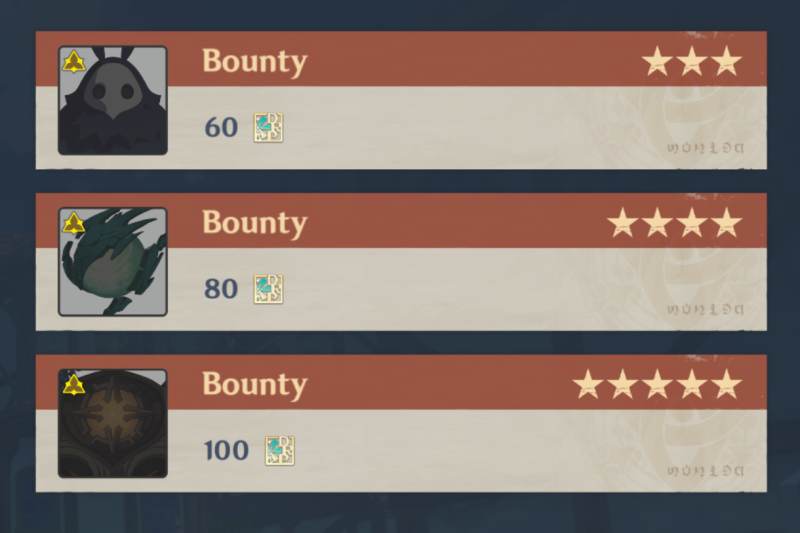 WHAT IS A BOUNTY?

Bounties are weekly search-and-defeat quests that require players to locate certain bosses in the world in order to gain reputation for their cities.

Players will be given the location of where they can track down their bounty where they will have to use their Elemental Sight in order to track their Bounty.

HOW DO YOU UNLOCK BOUNTIES?

Prologue, Act I: The Outlander Who Caught the Wind; Knight of the Realm (Mondstadt’s Bounties)

HOW DO YOU ACCEPT A BOUNTY?

HOW TO FIND YOUR BOUNTY?

Upon accepting a Bounty players will see a yellow circle that shows where the bounty is located.

Upon heading into the marked area where the bounty is located, players will have to trigger elemental sight in order to track their Bounty.

Upon triggering Elemental Sight, players will witness Elemental Trails that move into the direction of where they can find their bounty.

Players will have to complete a few battles or locate items in order to unlock their Bounty battle.

HOW MANY BOUNTIES CAN YOU COMPLETE IN A WEEK?

Players will only be able to complete 3 bounties per week, similar to requests.

HOW MANY BOUNTIES CAN YOU ACCEPT AT ONCE?

Players can only accept a single Bounty at a time, meaning that players will have to head back and forth between either Hertha or Ms Yu in order to collect all of the rewards from Bounties after completing each bounty.

WHAT REWARDS DO YOU GET FROM BOUNTIES?

Players will receive the following rewards for their Bounties: 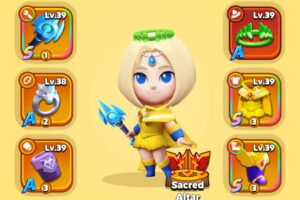 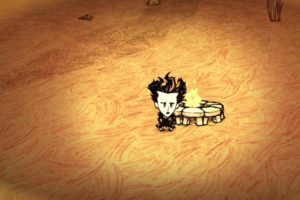 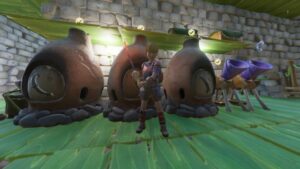