Klaus, easily confused with Krampus, though a much more difficult boss to deal with and quite frankly is a boss that many players in Don’t Starve Together don’t even know about.

Klaus is one of the various bosses that players will have to manually spawn as unlike seasonal giants like the Deerclops, Moose/Goose, Antlion and the Bearger players must actively seek Klaus’ spawn point and take steps to actively engage with him. 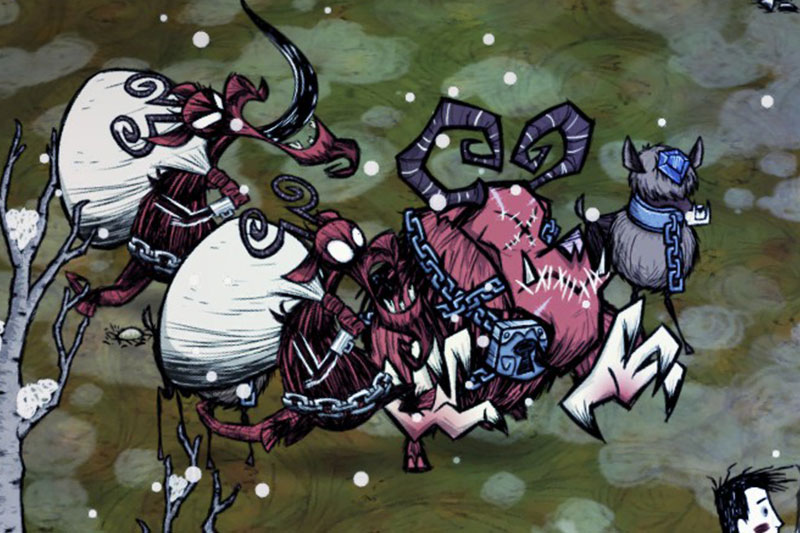 HOW TO SPAWN IN KLAUS

To begin spawning in Klaus, players must locate his Loot Stash, which appears to look like a big white sack with chains and a lock surrounding it.

Klaus’ Loot Stash is often found in a Deciduous Forest, though players may also find the Loot Stash in the Mosaic Biome.

Unfortunately the Loot Stash does not appear on a player’s map and is only available to players during Winter.

The Loot Stash spawns in about 1-3 days into Winter and will despawn after 1-3 days of Spring, though during the Winter’s Feast Event the Loot Stash will always be available to players, even if they are playing in an already established world as the Loot Stash does not require retrofitting.

It should be noted that the Loot Stash will not spawn in the exact same location every year, requiring players to search the areas it can be located in, which shouldn’t be too difficult.

I would strongly suggest laying some traps by the Loot Stash if you happen upon it by mistake as Traps (6 Cut Grass and 2 Twigs) will appear on the map and are often used as a cheap waypoint, though players can also place a Fire Pit (12 Rocks and 2 Logs) close by as Klaus will not destroy it with any of his attacks.

After locating the Loot Stash, players will have to insert a Deer Antler, which can only be obtained from No-Eyed Deers.

Players can either choose to kill a No-Eyed Deer with an antler, risking the chance of the herd aggroing, or can look around the area to see if a No-Eyed Deer has mistakenly crashed into a tree and dropped its horn.

Similar to the Loot Stash, No-Eyed Deers are seasonal and will only appear 3-5 days into Autumn, only growing their antlers during Winter and de-spawning about 2 days before or after the end of Winter.

There are 3 variants of Deer Antlers, though all 3 can be used be used on the Loot Stash and all will shatter into Bone Shards and prompt players with the message that the wrong key was used, essentially summoning Klaus nearby.

Do not be alarmed by the message stating that the wrong key was used as the Deer Antler is the only item players will be able to place in the Loot Stash before killing Klaus.

IMPORTANT THINGS TO NOTE BEFORE ENGAGING WITH KLAUS

Klaus will spawn in with two Gem Deers, one being blue and the other being red.

While players may have the impulse to kill the Gem Deers, it should be noted that killing them or leading them too far away from Klaus will enrage Klaus, essentially providing him with over double the damage and the health as well as 64% damage mitigation.

Even killing one Gem Deer will enrage Klaus.

Players will be able to tell that Klaus is enraged as he will increase in size and it is strongly recommended that players try to fight Klaus when he is not enraged as the damage output he receives is quite substantial.

It should also be noted that Klaus has the capability to spawn in between 2-6 Krampii which will need to be dealt with.

Though players may be tempted to use a Telelocator Staff to deal with the amount of spawns Klaus has, it’s a bad idea since this will leave him enraged from being far away from his Gem Deers. 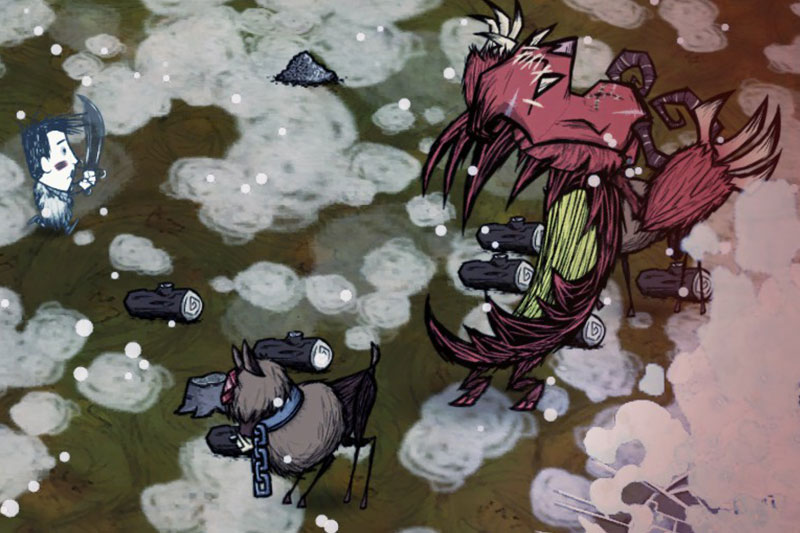 Klaus has two forms, the first being him with chains around him and the second being Klaus without chains.

The following are Klaus’ stats for each form:

3 seconds when not enraged

-100 Sanity per minute when enraged

Although it may seem like Klaus is easier to manage when he’s lost his chains, due to his lower health, it’s important to note that he gains a new long-ranged attack, which is signified by a chomp action.

Players will need to practice safe kiting skills to avoid this.

3 seconds when not enraged

-100 Sanity per minute when not enraged

-400 Sanity per minute when enraged 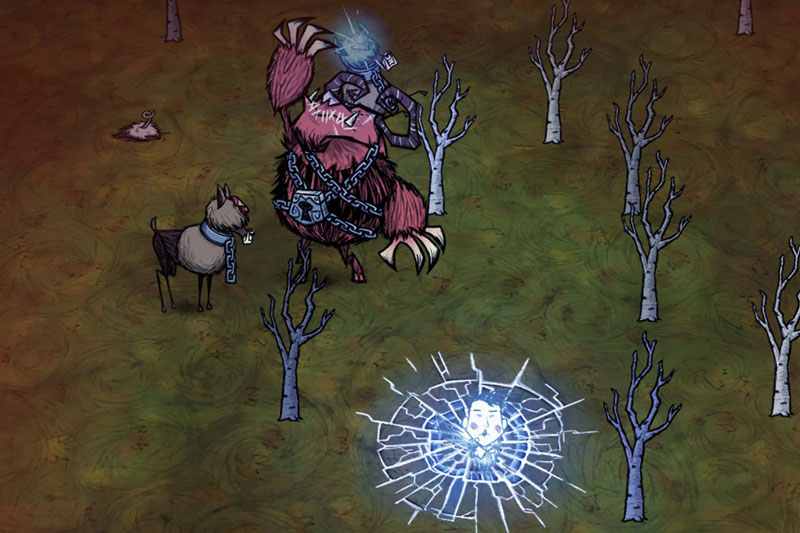 Each colour Gem Deer has different powers that are correlated to their colouring.

The Red Gem Deer will melt the land, causing any players who are standing on it to take fire damage.

Red Gem Deers are vulnerable to freezing weapons such as the Ice Staff (1 Spear and 1 Blue Gem) though they are immune to weapons such as the Fire Staff (2 Nightmare Fuel, 1 Spear, 1 Red Gem) or Fire Darts (2 Cut Reeds, 1 Charcoal and 1 Crimson Feather).

Alternatively, the Blue Gem Deer will freeze the land, causing players who are standing on it to freeze.

As you can assume, Blue Gem Deers are vulnerable to fire weapons while being completely immune to freezing weapons.

When killed the Gem Deers will drop 2 Meat and a Blue or Red Gem based on which is killed, though players should note that if they kill Klaus without killing the Gem Deers the Gem Deers will still drop the Gems that correlate to their colours and instead of dropping Meat will simply turn into No-Eyed Deer.

Klaus is a bit difficult to deal with as he has the ability to attack players 2 times in a row.

Players will still be able to kite Klaus regularly, striking between 2-3 times and then needing to back up quickly.

As players will not be able to spawn Klaus just anywhere, players may not have access to a road or path to gain speed, so players should try to craft themselves a Walking Cane before they enter this fight.

It is essential that players avoid all damage as Klaus hits very hard and can technically two shot a player, making armour absolutely vital for a player.

As mentioned, Klaus gains a second ability when he has been killed the first time, though this will still allow players to attack between 2-3 times before needing to kite.

As Klaus has a high amount of Health and does not cause players to lose Sanity when in his chained form (unless enraged), players can happily use a Dark Sword (5 Nightmare Fuel and 1 Living Log) without the fear of spawning in too many Shadow Creatures.

Players can also rely on a Tentacle Spike or Ham Bat (2 Meat, 2 Sticks and 1 Pig Skin) if they do not have access to the Shadow Manipulator, as both deal a healthy amount of damage and are relatively cheap.

When it comes to wearing Armour I strongly recommend that players either stick to Night Armor (5 Nightmare Fuel and 3 Papyrus) or a Football Helmet (1 Pig Skin and 1 Rope) as both mitigrate damage much better than a Log Suit (8 Logs and 2 Ropes).

Remember that Klaus hits very hard and if players are stuck in a Gem Deer’s special attacks they will often take a substantial amount of damage.

For players who are hoping to enrage Klaus, I recommend sticking to Bone Armor (dropped by the Ancient Fuelweaver) as it will be the best way for you to mitigate the insane amount of damage it deals.

WHAT REWARDS DO I GET FOR KILLING KLAUS?

Players will not receive rewards when they initially kill the first form of Klaus, being the Chained Klaus form, however, upon securing a takedown of the second form of Klaus, Unchained Klaus, they will receive:

1 Sketch for the Klaus Figure statue

2 Candy Canes (only during the Winter’s Feast event)

Not much of a reward… right?

Well, you’re going to have to take the Stag Antler and insert it into the Loot Stash as it is considered the proper key. 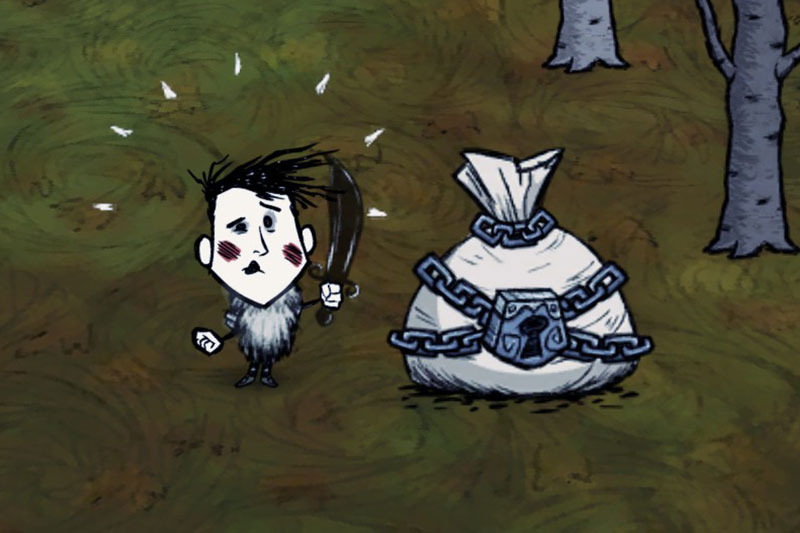 The Loot Stash provides players with 4 Bundled Supplies regularly, though during the Winter’s Feast event the player will receive 6 Gifts instead.

The following are all the rewards players can obtain from Bundled Supplies and Gifts:

10% chance to receive a Krampus Sack

50% CHANCE TO RECEIVE THE BLUEPRINT(S) FOR: 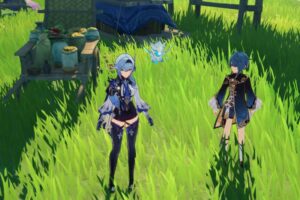 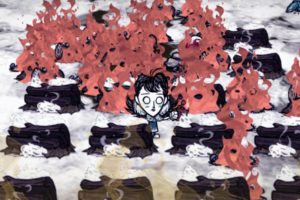 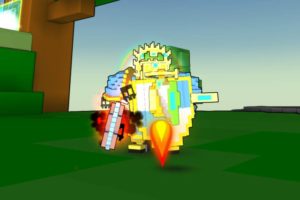