One of the new mobs that was brought to players was the Scarab, which admittedly is one of the most important mobs currently in the game, though one of the most frustrating mobs to locate and kill.

The Scarab is a very rare passive creature that is quite quick and is almost impossible to catch as soon as players hit it once.

Essentially a Scarab moves at an above average pace before damaged and upon being hit or spotting a player the Scarab will gain speed and run away from the player becoming nearly impossible to hit. Players should note that as soon as the Scarab is far enough from a player it will burrow in the ground, so you have a very limited amount of time to kill it. Players should also note that if Scarabs hit a wall or are cornered they will begin to burrow after a period of time, making it still very difficult to catch them in this manner.

I have to be honest in saying that while streaming Grounded we were never able to actually catch a Scarab, though at the time we weren’t as privy to the knowledge that we now have on catching these buggers, so the following guide will let you know everything I have learned about the Scarab and how you can make your lives a bit easier when trying to obtain them.

HOW TO SPOT A SCARAB

Most players have seen a Scarab walking around in the wild, though it may not be obvious that what they are looking at is a Scarab. Often, Scarabs get mistaken to Weevils as they share a similar appearance, though Scarabs are Green and they will twinkle when they are around similar to the way Buried Treasure does.

The very unfortunate thing about a Scarab is that they are afraid of any mob in the game, whether they are passive or hostile, meaning that the chances of one being at top speed at all times is very high.

The unfortunate element of the Scarab is that players will always need to use a ranged Weapon to kill it as players will never get close enough to a Scarab to use a Melee Weapon. That being said, players are going to want some really good aim when coming to catching Scarabs, so I strongly suggest practicing your aim on enemies such as Gnats to practice as they are also a bit chaotic to shoot, especially at a far range. 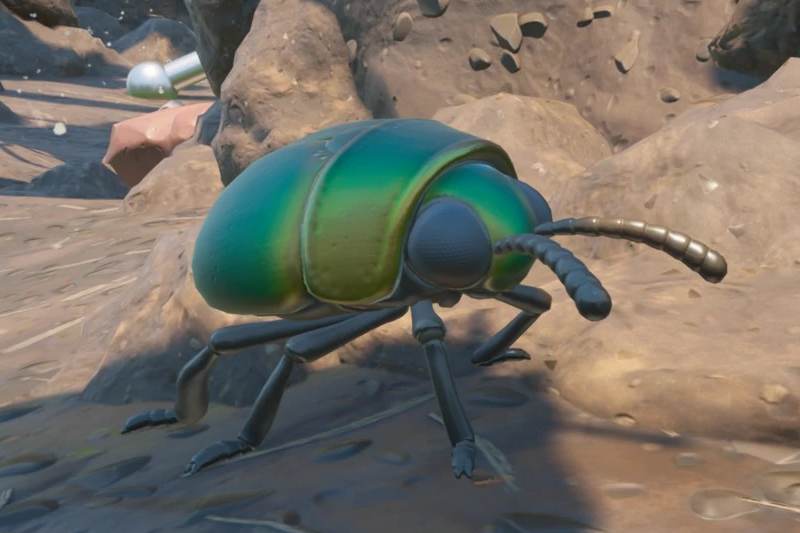 WHERE DO SCARABS SPAWN?

Scarabs have a good amount of places to spawn, though even though this is true, they are still very rare to find. Only a few spawn a day and once they disappear they take a bit of time to respawn.

The following are all the locations they appear in:

Left of the BBQ Spill, located in the unfinished area

Near the Upper Grasslands Field Station

In front of the Fertilizer Bag under the shed

Near the Samsquanch Dirt Bike by the base of the tires

Next to the Buster Cap Gun where the Green Shield Bug is located, under the shed deck

At the entrance of the Termite Den

In the trenches of the Shed Surroundings (there are 3 here)

As it is very rare for a Scarab to actually spawn players are going to want to make sure they always use a Resource Surveyor to scan for their shells. Players should keep in mind that these locations are based on where the Scarab was during the scan and since the Scarab is always in motion, they will never be exactly where the scan is. The best thing to do in this situation is to have multiple players so one can repeat a Survey and the other can locate the Scarab.

HOW TO EFFECITVELY KILL A SCARAB

As mentioned, players are always going to want to use a Ranged Weapon to kill a Scarab, but more specifically, players will always want to use a Crow Crossbow as they can have it loaded and ready to fire immediately.

Players are going to want to do their best to one shot the Scarab and will need at least the following:

If players do not have these, they can attempt to use a Crow Crossbow in tandem with the Coup de Grass Mutation, but due to its RNG it is unreliable and is recommended not to attempt.

If players still do not have a ranged Weapon and want to attempt to kill a Scarab with a Melee Weapon the only way to do so is by striking it from above or by sneaking up on it, which are both very ineffective.

WHAT DO YOU GET FROM SCARABS?

Scarabs drop a single resource, but admittedly it’s the most important resource in the game due to the fact that it can be used at the Smithing Station to make Jewels, which allow you to upgrade your Weapons and Tools to tier 8 and 9.

The resource Scarabs drop are called Twinkling Shells. Players should note that they will be able to get 5 free Twinkling Shells from an abandoned backpack located in the crevice of the Woodpile. It’s going to be extremely beneficial for a player to collect these before they go on adventures to look for Scarabs as truthfully Surveying is the only way to locate Scarabs without smashing your face in. 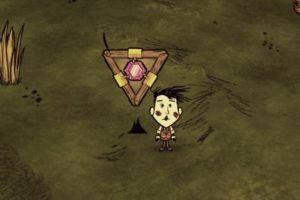