Kirby and the Forgotten Land is by far one of the most game changing Kirby games in the franchise.

Players will have to solve puzzles in all almost all of the maps and will need to acquire new abilities that they can upgrade. Most notably, players will be able to suck up large objects using their Mouthful Mode in order to complete tasks that they would not have been able to do otherwise.

I have to say, Kirby and the Forgotten Land has been the most exciting game for me to try, having me unbox it immediately upon arrival and even start streaming it as soon as I could. While at this point I have been striving for a 100% complete on my own, I am so excited to show you how I got there and give you some tips and tricks on how I accomplished it.

That being said, it’s no secret that a good portion of the game is going to be completing Missions in order to get your 100%, essentially rescuing Waddle Dees that will help strengthen your Waddle Dee Town, which contains a variety of shops that will help improve your gameplay and ensure that you will be able to get through the whole game.

While a player does not need to complete every single Mission in the game, essentially being able to complete the game without having the greater majority of the Waddle Dees, it’s still strongly recommended that a player gets as many Waddle Dees as soon as they can as the shops have a great impact on the strength of Kirby and can essentially make it so Bosses are immediately nukeable.

The following guide will take you through everything you need to know about the Fast-Flowing Waterworks Missions as well as where all the hidden Capsules are in this area.

1:50 Win the battle without falling into the water

As is with all stages in Kirby and the Forgotten Land, players will receive 3 Waddle Dees simply for completing this map. Admittedly, this is one of the more frustrating maps that requires players to be well aware of their surroundings as players will be pulled through currents that are quick paced.

Luckily for players, if they get pulled by the current they will be able to slowly make their way up the current, though I will say this is a hassle and should be avoided if a player can. Nonetheless, it is nice that you can kind of go back if you’ve missed a task as I prefer completing a map 100% before moving on to the next, unless it’s a really difficult boss battle or the task is “don’t take any damage.” Gurl, I can’t avoid taking damage. I’m Basically Average…. 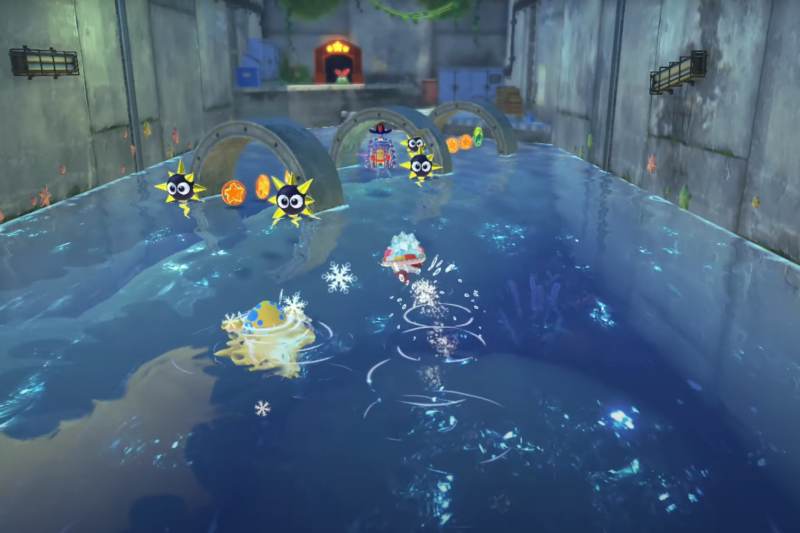 The first Waddle Dee comes fairly quickly, being in the first current that players are in.

It is hidden in the center ring closer to the end of this portion of the map.

I strongly suggest that players try to stay in the center of the first current so they can get this Waddle Dee as Star Coins aren’t the most important, due to the sheer amount of them that the player will collect in their adventures.

Players could try to stay on the left portion of this current so they can get all the rewards from the three rings, but it’s much more important that you rescue the Waddle Dee rather than get the Star Coins.

Coming from a scrub… it can be difficult to maneuver in the currents. 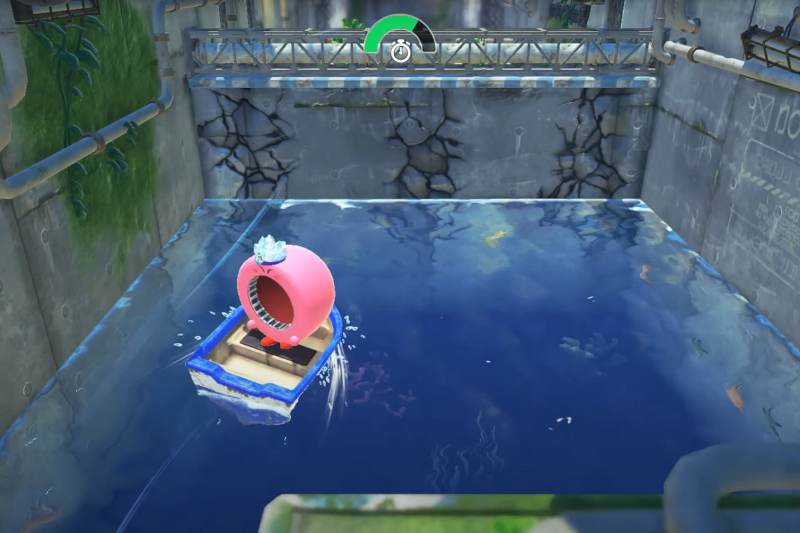 After players collect the second Capsule, in the second area of the map, players will see a Bomb Box to the right of their screen.

Destroy this bomb box by using an ability and follow the trail that it makes (to the left of the screen.) Here players will locate a door that is placed underneath a platform.

In this room players will need to use their Mouthful Mode in order to suck up a large circle to ride the boat.

Using the Ring Mouth Mouthful Mode players will need to use their Windblast in order to quickly make their way across the map.

Note: there are a number of portions of this map that are closed off rooms, so it is very important to look at the layout of the room before charging off. Players will be able to re-enter this room if they fail this portion though the solution is as follows:

Wild Blast to the RIGHT

Wind Blast to the LEFT

Wind Blast through the CENTER

Wind Blast all of the mobs and receive the second Waddle Dee. 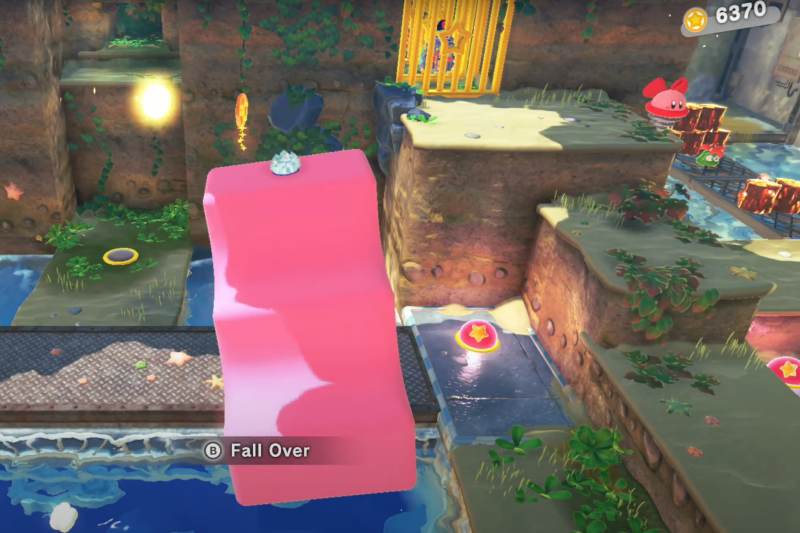 The third Waddle Dee can feel a bit long winded to obtain as it requires a few steps for players to complete before they can acquire it.

The third Waddle Dee is located after players collect the second Capsule and the second Tin of Fish.

Essentially players will have to press a Blue Button with a star in it which will reveal a hidden bridge then must head to the left in order to retrieve the Staircase using Mouthful Mode.

Players must head all the way to the right of their screen in order to press the Red Button with a star on it to open the gate with the hidden Waddle Dee. 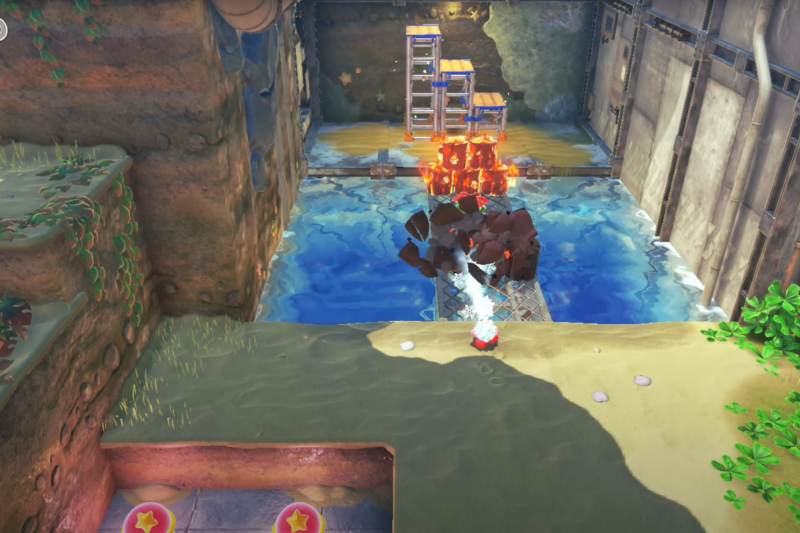 Directly behind the third Waddle Dee is the fourth Waddle Dee and will require players to put in almost as much effort in order to rescue.

Players will have to head to the right hand side of their screen and will need to use an Ice Ability to stop the stumps from burning.

Players must retreive the stairs from the end of this bridge in order to place it on the two Red Buttons with stars in them.

Upon doing this successfully players will open the Gold Star gate that entraps the Waddle Dee. 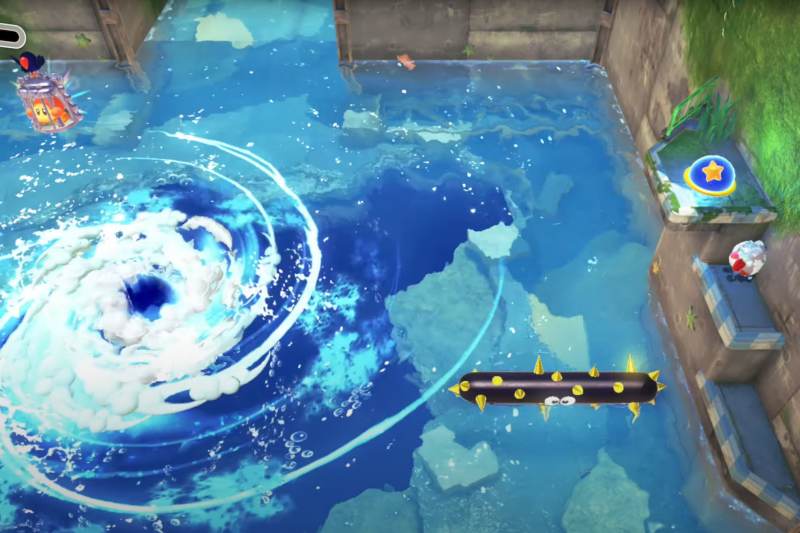 The fifth Waddle Dee is a bit of a process as it requires players to locate a Blue Button with a star in it that is not on screen at first.

Players will hear the fifth Waddle Dee crying near the second Whirlpool and will need to head to the right of the room to jump onto platforms where there is a Blue Button with a star in it.

Press this button to force blocks to appear that you can run on in order to save the fifth Waddle Dee.

I have to say that quests that require you to look for hidden food aren’t really my favourite. That being said, the quest for Fish Tins is relatively easy, though it will require players to do a bit of searching in order to get them all.

Quite honestly, I can see many players grabbing Fish Tin #2 or #3 before they realize that this is a quest as Fish Tin #1 is quite hidden. 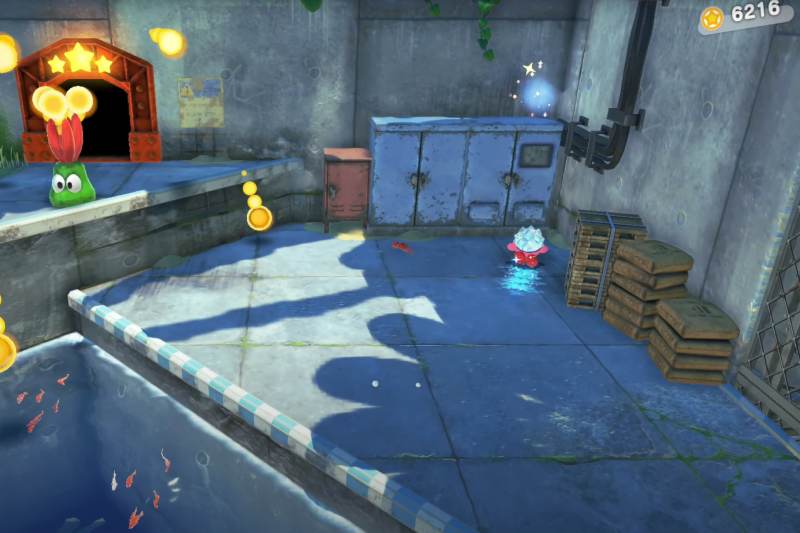 As we should all know by this point in the game, there are a good portion of sparkly orbs that a player can interact with in order to make hidden items appear.

Very close to the beginning of the map, after players have saved the first Waddle Dee, players will reach a location with a door with 3 Stars on it.

Players will want to head to the are of “lockers’ and jump to the top of it in order to make the sparkly orb appear.

As this area isn’t the highest, players should be able to quickly fly from anywhere, though if players are struggling to reach it, they can jump on the platform to the left, onto the red/brown locker and then receive the first Fish Tin. 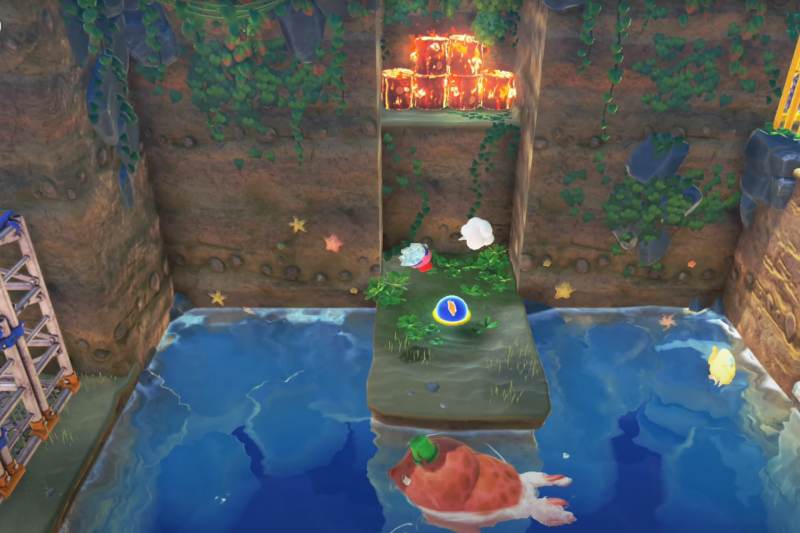 Just beyond the portion of the map where players have to locate the Golden Fish and the second Capsule players will be met with a Blue Button with a star in it on a grassy platform.

Players will need to press this blue button in order to make a bridge appear and then will have to suck up the Staircase in order to walk up to it.

After players have marched the staircase to this location they will need to use their Ice ability to stop the stumps from being on fire, revealing the second Fish Tin. 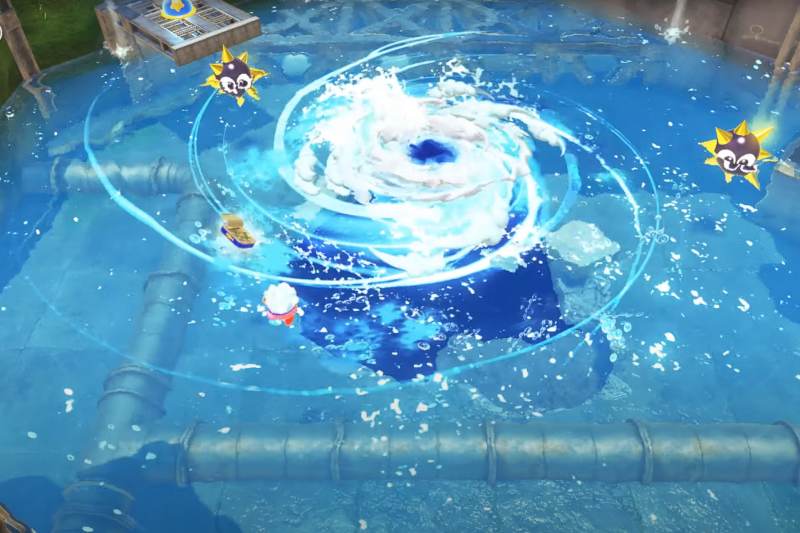 Admittedly, this Fish Tin is the most frustrating one to obtain as players will need to fly very close to to where the massive whirlpool is. 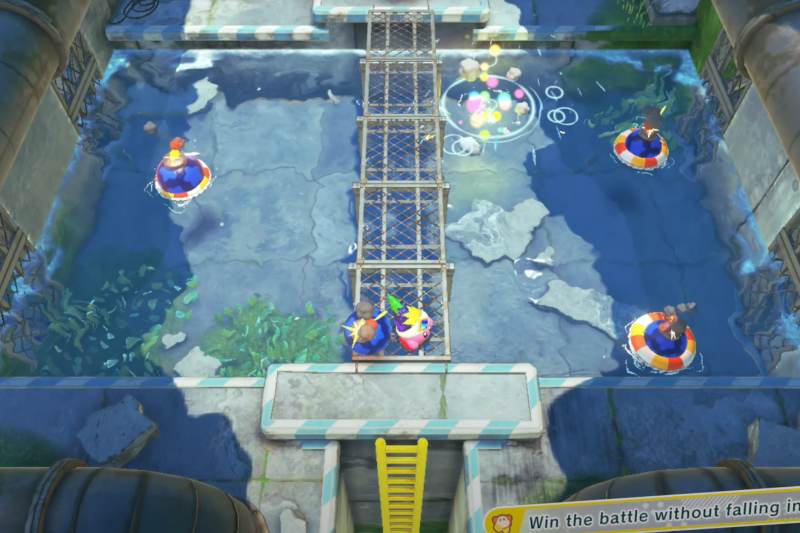 WIN THE BATTLE WITHOUT FALLING INTO THE WATER

Quite frankly, this is the toughest Mission to complete in the whole level and it can get frustrating as mobs will randomly shove you into the water.

I strongly recommend using the Bomb ability as doing so will allow players to throw Bombs into the water, which will float and move towards the location the player throws them in.

Players will need to make sure to kite mobs as they jump out of the water to attack and must make sure at all costs that they do not fall into the water.

While players can use the Ice Ability here and can skate on water, if the player does not land on the water correctly they can still fall into the water, essentially wasting their time.

There are a few waves of enemies, so be expecting to repeat this part a bit if you’re someone who cannot dodge well. 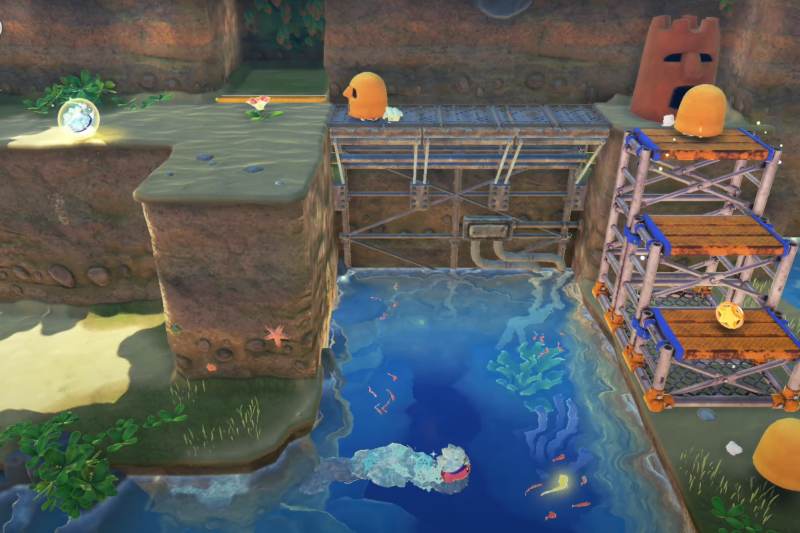 I have to admit that I am typically a player who explores every nook and cranny of a map, especially when playing Kirby games. I will have to say that I’m going to assume that this Mission goes uncompleted for a great number of players as it’s difficult to spot and truthfully… if you don’t know it exists, you’d probably skip this point.

After players locate the second Capsule that is hidden behind the Golden Gate players can look into the river to see a bunch of orange fish. On the right hand side of this river, players will see a gold fish swimming amongst them.

Quickly reach this Gold Fish in order to collect your Mission reward! Quite simple, but the changes are so high that you will miss it upon first completing this map. 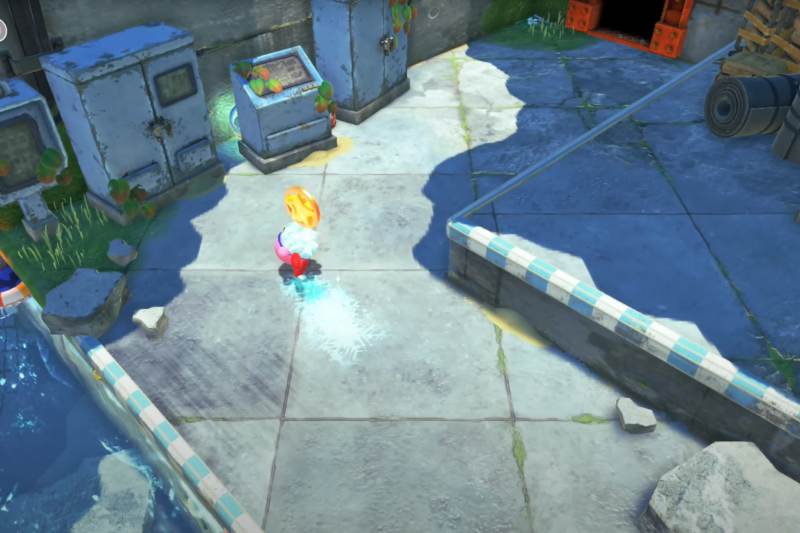 The first Capsule is a bit into the level at the point where there are two portions of currents. For clarities sake, this is immediately after players get the Chain Bomb Blueprint.

After players make it to the end of the second current there is a Capsule hidden behind what looks to be a work station.

Players will simply need to head behind the work station to claim this Capsule. 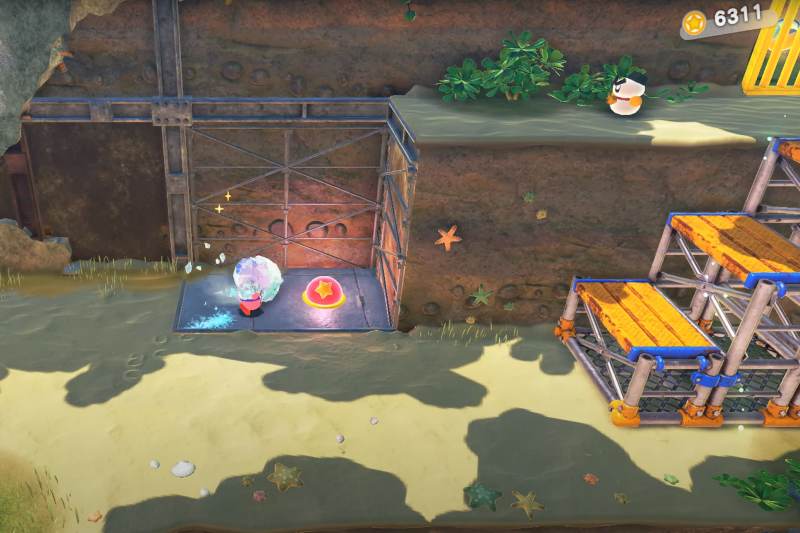 After players have rescued the second Waddle Dee they will enter an area that has a Staircase that players can use Mouthful Mode on.

Players will have to place this staircase on top of the Red Button with a star in it in order to keep a Gold Star Gate open.

Players can then take the same stairs up in order to receive the Capsule on the right. 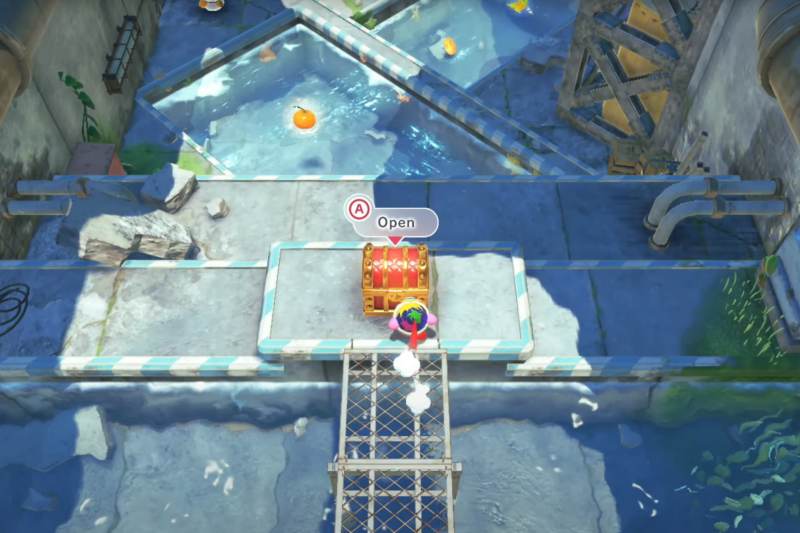 After players complete the first battle in the area that becomes “locked” players will receive the Chain Bomb Blueprint.

Admittedly at this stage, the Chain Bomb is one of my favourite abilities as players can essentially stack multiple bombs near each other so that when one explodes they will all explode dealing damage over time. 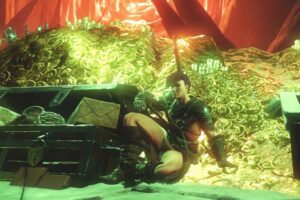 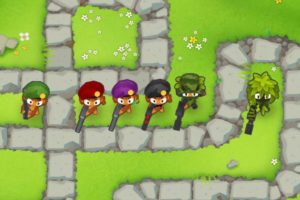 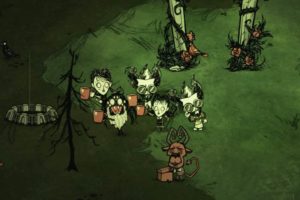