One of the most standout points of Kirby and the Forgotten Land is simply how well done a lot of the levels are.

While for me a good portion of the “less fun” levels simply have to do with game mechanics, I have to say that this is severely outweighed by the simple factor that there are just so many abilities that provide utility in this version of Kirby that were simply not available in older versions.

Kirby and the Forgotten Land is jam packed with new abilities, ability upgrades as well as the ever impressive Mouthful Mode that allows players to suck up various large objects in order to utilize them for much more powerful abilities.

I have to be honest in saying that the first time I played the demo of this game on Twitch I was so hyped that I didn’t know what to do, my favourite addition being the Missions that players can complete in order to help them secure 100% in the game.

As someone who deems himself a completionist, this made me so happy as in previous Kirby games we have to admit that it was a bit more difficult to figure out what it was that you were missing when completing a level. Hopefully with this mechanic more players are finding it easier to acquire this (if they want it) and if not, more helpful to be able to progress the game as Missions will help players unlock more aspects of Waddle Dee Town and break down barriers in the World.

Although not every player is going to want to secure 100% in Kirby and the Forgotten Land, I thought I would share how I managed to do so in hopes of helping you get what you need in order to advance.

The following guide is on Searching the Oasis and will take you through all of the Missions and Capsules players can locate in this area. This guide will also let you know of a Blueprint that is available in this level.

7:20 Dilligent digging in the secret room

To begin, as most players will know at this point, players can obtain 3 Waddle Dees simply for completing a level.

There are many hidden Missions in this level that may not be obvious to players at first, so don’t stress too much if you’re in this boat. 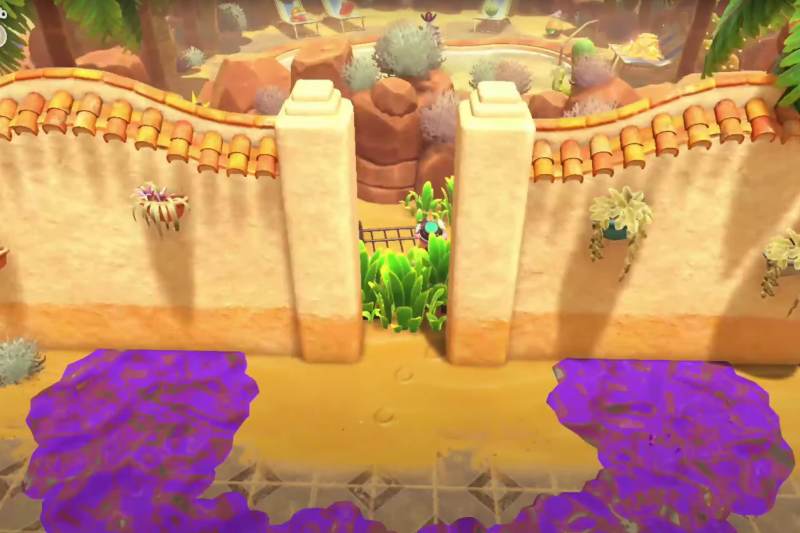 When players are met with the second Snake they will have to kill it to reveal a hidden area behind it.

Players must go through this area to find a hidden pool with a Waddle Dee floating in the center of it. 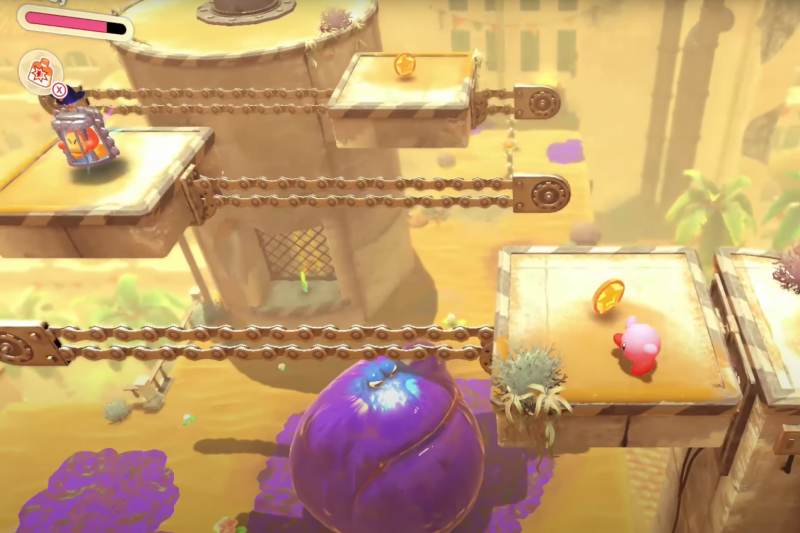 After players locate the Buzz-Saw Blueprint they will head to an area with a Poison Croakom.

Here players need to head to the bottom right corner of their screen to reveal a platform with a ladder.

Take the ladder up in order to find some moving platforms.

Players can try this as many times as they need, but they will be able to get to the second platform by hovering to it. Just make sure that you don’t fall as this means you will have to repeat the second.

Continue going this way instead of falling as this is the path to the third Waddle Dee. 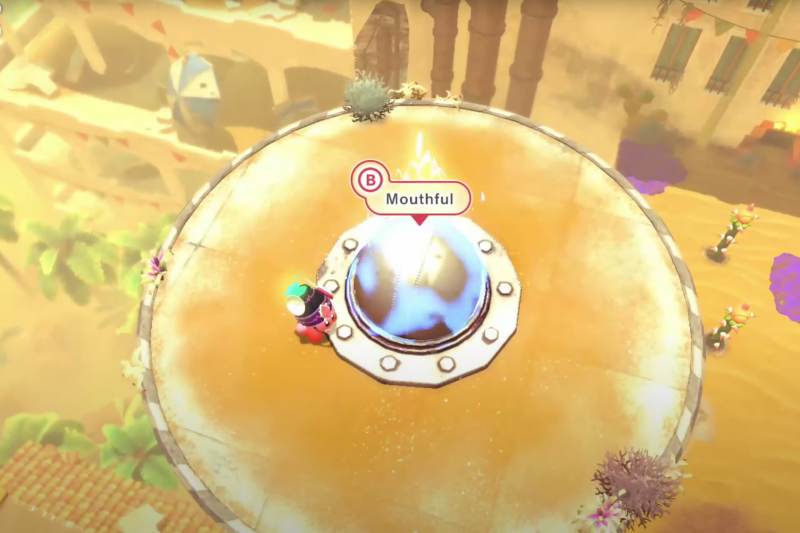 If players have made it to the end of the jumping puzzle they will reach a metal dome that they must use Mouthful Mode on.

Remove this dome by rotating your joystick taking you to the next area.

Here players will find a Pipe to use Mouthful Mode on and will need to use Pipe Mouth to jump across a puzzle to smash into a wall.

Unfortunately it doesn’t seem like players will be able to repeat this section easily as the only way it is possible is to back track and complete both sections again, so if you miss it I would simply recommend repeating the level as it can feel like a bit of a time waste.

The choice is yours though! Just make sure you smash through that wall! 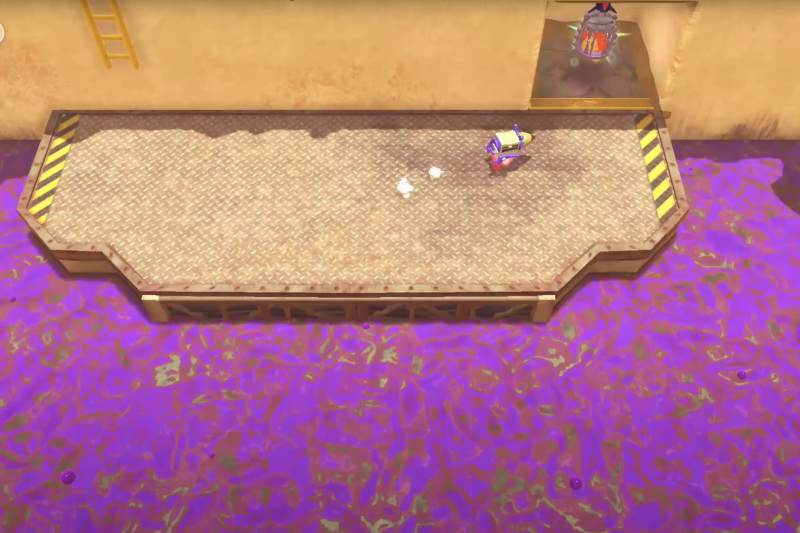 After players have defeated the first Poison Croakom they must use Water-Balloon Mouth to clean up all of the poison on the floor.

Doing so will reveal a path that allows players to dig under the gate in order to get to the door for a puzzle.

In this room players must dig up all of the Green Diamond Pieces to reveal the hidden Waddle Dee.

Players will not be able to repeat this section and will have to reload the map if they fail it and let me tell you… I hate this part so much.

If you throw your hands up in the air and say “screw this!” I don’t blame you. It gave me a bunch of anxiety, even though I got the Waddle Dee in the first try.

I didn’t get the other hidden achievement immediately though. 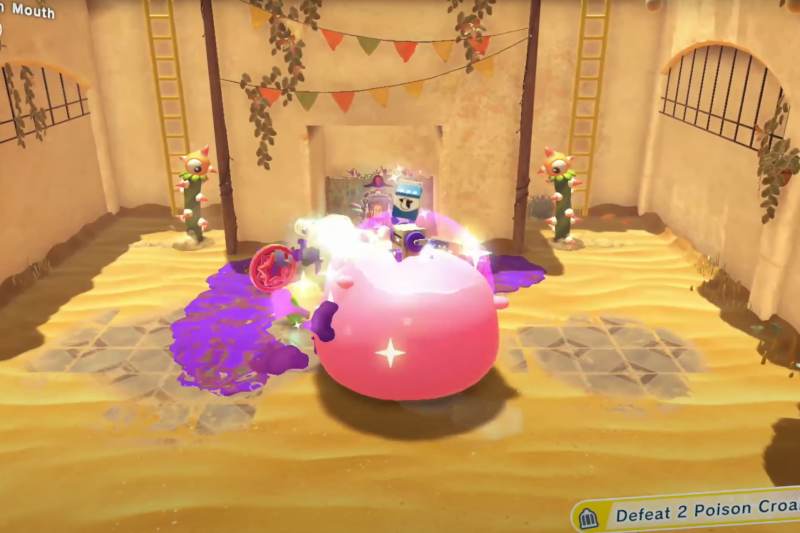 The fifth Waddle Dee is easy to miss if players aren’t aware of how they can kill the second Poison Croakom.

When players see this Poison Croakom, which is right in front of two Ladders, players must head to the left in order to dig behind a gate.

Once behind the gate players must get to the Blue Button with a Star in it to make the Pipe rise and access Water-Balloon Mouth.

Thoroughly clean this area as not only is there a hidden Waddle Dee behind the Poison Croakom, there’s also a hidden Capsule under the poison. 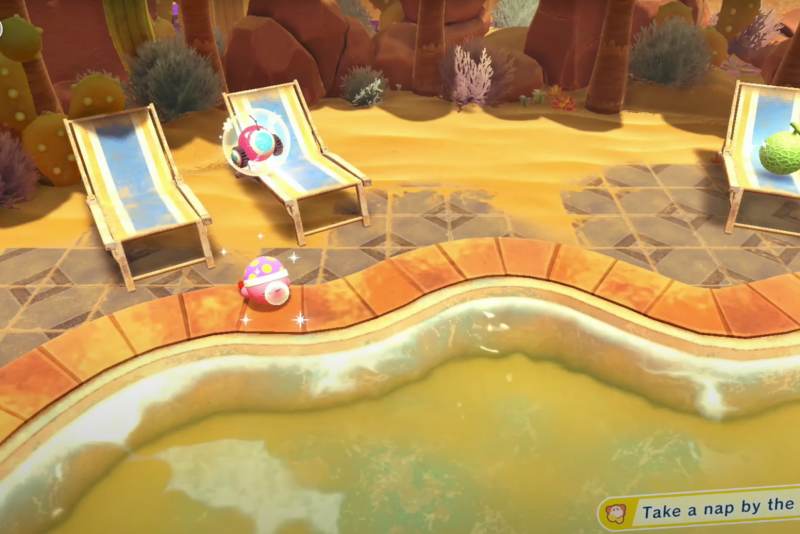 TAKE A NAP BY THE SECRET POOL

After players locate the second Snake in the first area they will be able to uncover a secret area behind it that has a pool.

Here players must take on the Sleep ability by swallowing a mob and will get the achievement.

Honestly, this is a simple and cute Mission and quite frankly, I don’t usually take the Sleep ability unless I’m very low on Health, so I’m glad I did here! 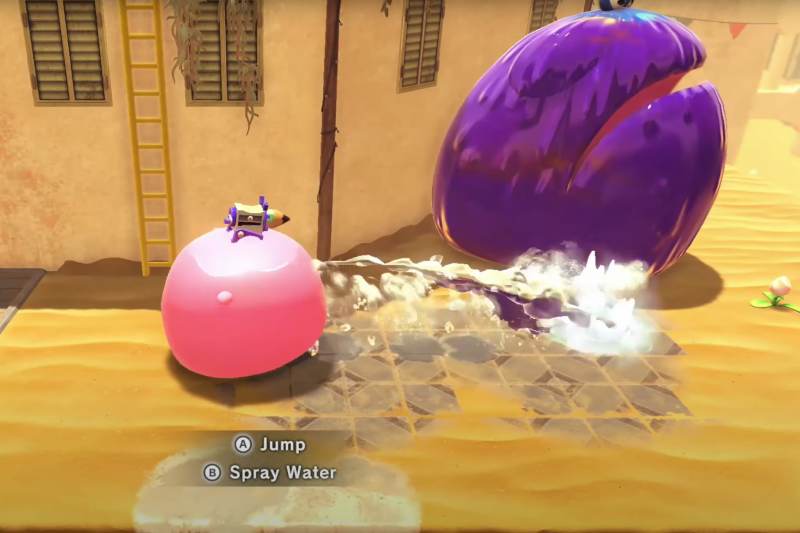 There are two sections of the map where players can defeat Poison Croakoms.

Players will not be able to kill these in any other way than using their Water-Balloon Mouthful Mode, even if they attack with the Ice ability or other abilities “that make sense.”

The first one is located shortly after the third Waddle Dee and the second is located close to the end of the map.

The second one is more difficult to figure out how to kill as it has a bit more steps.

After players press this button the platform with the spout will rise allowing players to access the Water-Balloon Mouthful Mode to defeat the Poison Croakom. 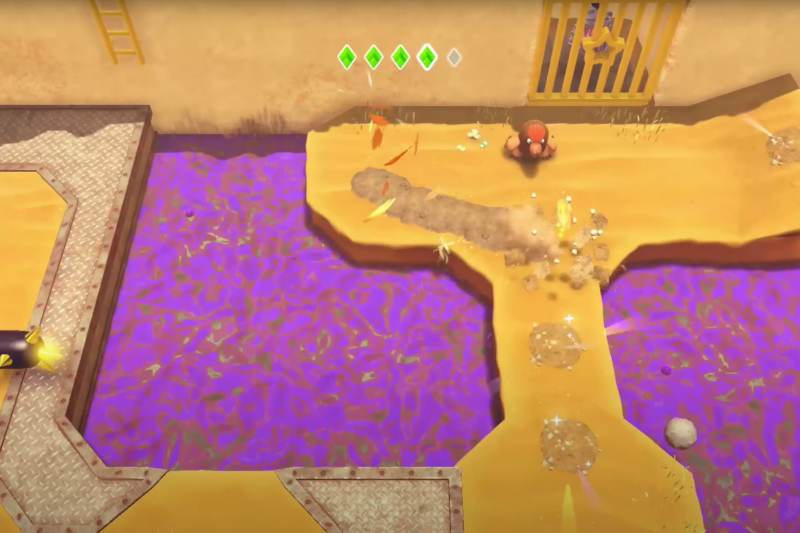 DILIGENT DIGGING IN THE SECRET ROOM

After players defeat their first Poison Croakon they will be able to access a room that has the fourth hidden Waddle Dee.

This room is accessed by digging behind a gate and heading into the door.

Here players must make sure that they dig up every single dirt mound.

I’m going to admit that I found this very difficult as not only do you have to deal with moving platforms, you have to make sure that you are making sure you get every single one.

As many know, time-sensitive parts of maps have my anxiety running through the roof and I typically do not enjoy that. Add an element of aiming exactly correctly and you have me panicking heavily.

This may take you a few tries and if you don’t get it, honestly don’t sweat it… it’s actually quite tough in comparison to the other Missions available to players. 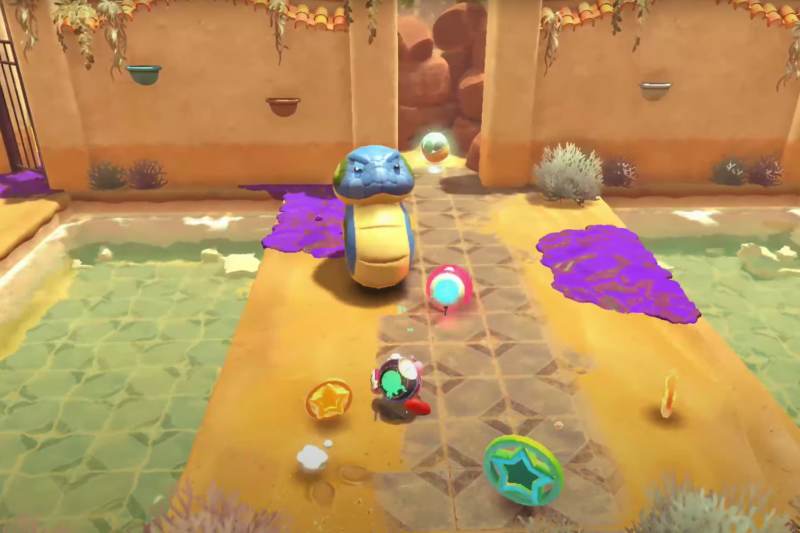 Hidden behind the first Snake is a Capsule. Players do not need to kill this Snake in order to get the Capsule, though it is recommended for the players safety. 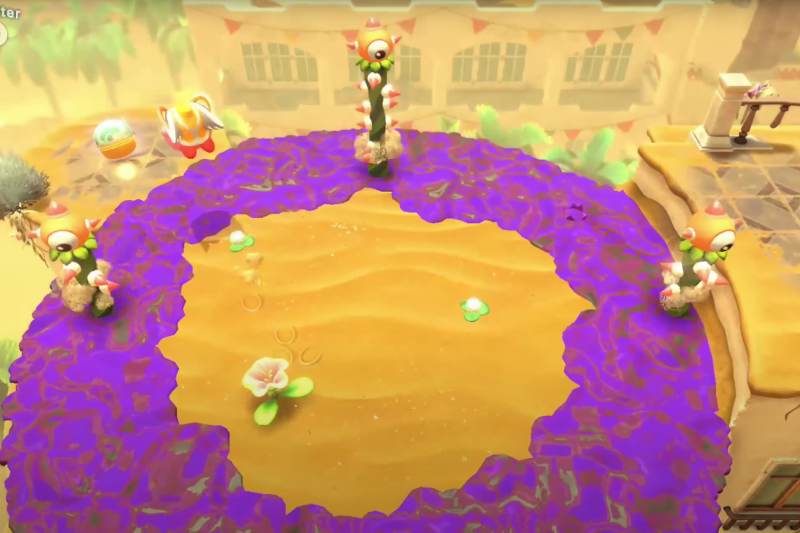 In the North West of the first ring of poison players will see the second Capsule.

You can fly over the poison in order to acquire this Capsule. 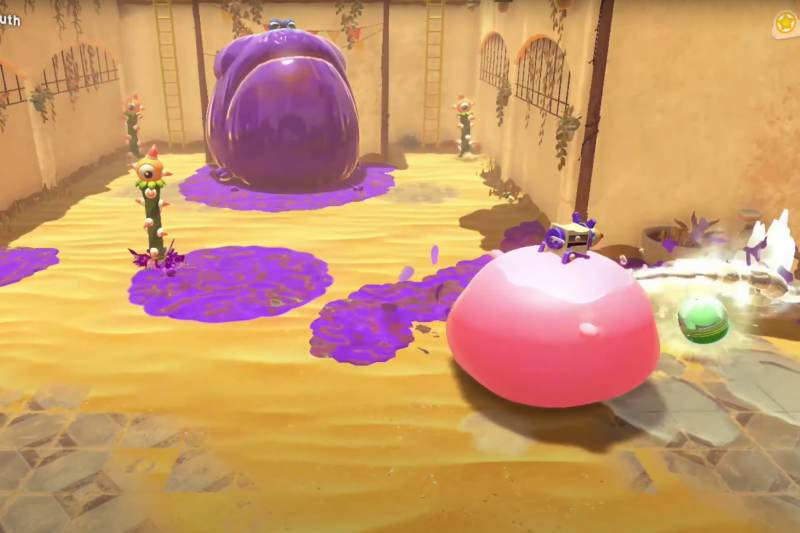 Close to the end of the level as players meet the second Poison Croakom they must kill for a mission players will see a lot of poison that they must wash away in order to reveal the third Capsule.

Take your time here and always remember you can refill your Water-Balloon Mouthful Mode. 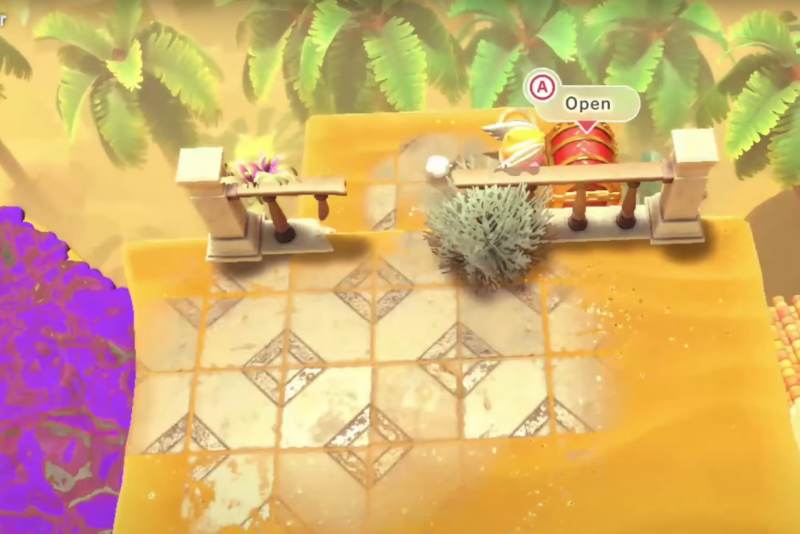 The Buzz-Saw Blueprint is honestly both obvious and not obvious to locate as players will have to grab it immediately after they reach the first ring of poison.

On the platform above that they must hover to there is a bit of a crack in the fence. Go through this fence in order to locate a chest with the hidden Blueprint. 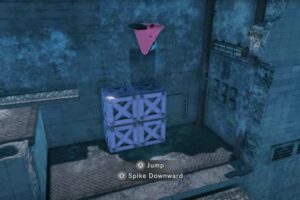 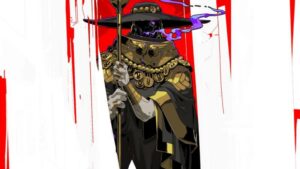 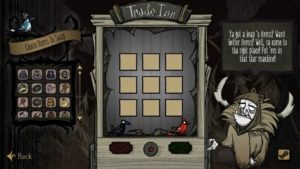